August 22, 2011
I've been going back through one of my favourite DVD's, Serge Gainsbourg: D'autres nouvelles des étoiles, a 2 x disc compilation of tv appearances, broadcasts and interviews from 1958 to 1989, which Mercury/Universal brought out in 2005. It's fascinating stuff and gives a thorough overview of every stage in Gainsbourg's career, from the early jazz-influenced tunes, to lush string orchestrations, and on to later reggae experiments. (As with everything, I'm sure you might find a free download somehere, but the extensive sleevenotes and credits make it well worth the purchase price.) 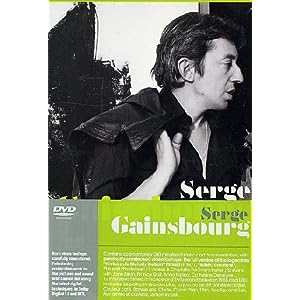 It was Mick Harvey's Gainsbourg cover albums of the 1990's (interpretations is probably a better word), which my friend Grand Snr turned me on to, that gave me a proper obsession with the man. Those were Intoxicated man (1995) and Pink elephants (1997), both on Mute Records. This was the first time (that I know of) that Gainsbourg's lyrics had been translated into English in that kind of length and detail, and set to music. The strong elements of sensuality and surrealist poetry that shine through give the music another dimension. Like these lines, from The ticket puncher (Le poinconneur des Lilas).

I've had enough, I've had it with this bullshit,
Down in this cesspit,
I'd like to be on the trapeze, leave my cap and cloakroom keys

Very punk, those lyrics, but playful at the same time.

I came across this fascinating detail, given by Jane Birkin in a Vanity Fair piece in 2007 by Lisa Robinson, which reveals much information about the man not obvious in his songs.

I never saw him take a bath. He was the cleanest man I ever knew, he knew how to wash all the bits, but in 13 years I never saw him take a bath, I never saw him go to the loo, I never saw him completely naked, the children never saw him naked—and they tried like mad. He was very pudique. (The closest translation of this word in English is shy, modest, discreet.) If he had seen me giving birth to Charlotte, it's possible he never would have slept with me again, and I wasn't taking that chance. He always paid his taxes early: he felt he was an immigrant—his parents were from Russia and as such he should behave correctly. He wanted shoes that felt like gloves, so I got him white Repetto ballet shoes, which he wore without socks. I bought him jewelry and encouraged him to keep a three-day stubble on his face. He sat in gilt chairs after fashion shows and picked out dresses for me—Balenciaga, Yves Saint Laurent, Givenchy. Every New Year's Eve we would go to Maxim's and he would liken it to being on the Titanic because everyone was so much older, and I would nick the ashtrays and the cutlery.

Some of those phrases read as if they belong in a Gainsbourg song, which is appropriate as Jane Birkin was basically his muse for the years they were together. It may be news to you, as it was to me, that Serge was a shy man, although that's not the whole story as he was full of contradictions. You don't need to understand French to hear the explicit intent in this all-time classic duet with JB, released in 1969 (this is one unfortunate omission from the DVD by the way - presumably it was too hot to handle for tv at the time).

Because the song has become so notorious over the years (banned in several countries), it's easy to take it for granted as a piece of music, or treat it as a novelty piece. It is one of pop music's greatest treasures. And although the songwriting is great, it's important too to give credit to the gorgeous, sensitive, swirling arrangement by English composer/conductor Arthur Greenslade. I love that liquid bass too - a definite precursor to the Melody Nelson sound. (By the way, apparently the footage in that video is part of Jane Birkin's own Super 8 collection.)

Also from that Vanity Fair piece, another quote from Serge -

I prefer ugliness to beauty, because ugliness endures.

Based on the women who were part of his life, it seems more likely that comment was directed at himself. And it seems he never thought of himself as handsome or beautiful, which meant he had a very shy manner. Something which his demeanour in this interview with Denise Glaser confirms.

That interview was done at the time of his sixth album, Percussions , in 1965. You'll have to get your hands on the DVD to get the benefit of subtitles on that, but at about 3m30s in that clip he explains why the strong African influence on that album. Something that's very clear on this song from the album.

By the way, as has been pointed out elsewhere, this song is a copy of Babatunde Olatunji's Akiwowo, so Serge was not above using the material of others. You can compare here.

One of the real treats of the DVD compilation is the complete collection of short films made to accompany each track (directed by Jean-Christophe Averty) on the concept album Histoire de Melody Nelson from 1971. It's an album that's another glorious musical highlight of the SG-JB years.

That dominant bass sound and sublimely unsettling string arrangements by Jean Claude Vannier (also co-writer on two album tracks including Ballade). You'll find plenty more detail on the concept and background to that album in this article by Sylvie Simmons, which is extracted from her book Serge Gainsbourg: A Fistful of Gitanes (Helter Skelter) (a book I haven't yet read but, I'm thinking, a must for Gainsbourg fans).

I must say I find some of the footage of Serge from later in his life pretty poignant. I remember reading somewhere that he lost his way somewhat after Jane Birkin left him. You could certainly read that into the later footage, especially when you compare how vibrant he looked during the "Birkin" years (or maybe it's just what comes to all of us later in life). Like in this interview along with JB for example, from 1971 - the Birkin section (about 19 minutes in) is contained on the DVD compilation.

I prefer to remember him in his prime like that - here's a few great examples to finish.