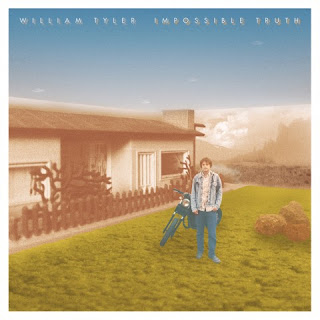 A thoroughly magnificent album, with a range of gorgeous guitar textures and swoonsome but hardy melodies.

These eight chiming, mainly 12-string, electric guitar instrumentals manage to conjure vast horizons, incorporating the beauty and harshness of the American frontier, much like some of the best westerns which have apparently provided inspiration to Tyler.

Opener Country of illusion, for example, features a series of heart-lifting melodies, each with a bracing edge, as it moves through several movements – and they do literally move.

Geography of nowhere starts out on a noirish note, with shimmering chorus filters - an apt evocation of Los Angeles perhaps - before launching into a busy fingerpicked section.

Cadillac desert is another burnished piece, with a beautiful Byrdsian (circa 68, reminding a little of the great Old John Robertson) mid-section, adorned with keening pedal steel.

The middle of the album heads into rousing acoustic, almost rag, territory with We can’t go home again and A portrait of Sarah, before returning with the glorious Hotel Catatonia - a measured 12-string electric piece with a particularly memorable banjo coda – and the atmosphere of stoic elegy of the majestic Last residents of Westfall.

The ten minute The world set free closes the album with a subtle build of drums, brass and steel guitar around a circular melody – it hints at Jack Nietzsche’s soundtrack work a little – and is completely engrossing

Country styles are the first obvious lineage for the music, something which isn’t a surprise given Nashville is Tyler’s hometown. The large presences of Richard Thompson and John Fahey are also present but some other names new to me (both musical and otherwise) were checked in this interview I did with William for WeAreNoise. (http://wearenoise.com/index.php/2013/04/william-tyler-qa/)

Hi William, congratulations on the new album, it’s a fantastic piece of work. I believe you drew particular inspiration for it from two books you were reading a while back. Can you tell me more about that?

I have a particular love for the urban theorist Mike Davis, he’s written a couple of books about the pecuilar design and history of Southern California. One of them is called “The Ecology of Fear” and it is essentially about how Los Angeles is one of those cities that continually gets destroyed in spectacular fashion in pop culture; earthqaukes, volcanoes, etc. Yet it’s also a city that positioned itself to be continually at risk of disaster, essentially a sprawling churning metropolis at the edge of a great desert.

I just happened to also be reading “Hotel California” by Barney Hoskyns at the same time; he examines the 70s Laurel Canyon music scene and gets into some of the same themes of unsustainablity and grand illusion/ambition. I saw a lot of apocalyptic parallels between, I guess the Eagles and catastrophic earthquakes? Ha.

It seems like a very specific and intriguing backstory for an instrumental album. Your album trailer film also has you speaking about the kind of America you grew up in. Were you particularly conscious of evoking a particular time with the album, the 1970’s?

Yes, because I was born at the tail end of the seventies, and I do think that there was a very definite cultural paradigm shift in 1980. Reagan, the failure of Heaven’s Gate and the end of the rebel Hollywood system, the beginning of MTV, the death of John Lennon. All pretty horrible shit, it was also the time where my parents’ generation was shedding its youth and its idealism and I think even as a kid I was aware of that. So I spent a long time fantasizing about that era, but a lot of the story of this record is me as a young man trying to lay those ghosts to rest.

What’s the particular significance of Heaven’s Gate for you?

Like I was saying, it was literally the film that ended a whole way of making films. And its failure really was due to a lot of bad, malicious press. I mean, it’s a masterpiece of a film, slow, deliberate, beautiful, sad, cynical. The sort of film that just doesn’t get made anymore. It was a western about the end of innocence and the birth of big money capatilism and it was also somewhat a victim of that. I think it’s ironic that it’s currently undergoing such a renissance of reevaluation. Very overdue.

You’re doing this tour (a couple of Irish dates anyway) with Hiss Golden Messenger (M.C. Taylor), how did you two hook up?

We were paired together for a tour a couple of years ago and we had a deep connection almost immediately. We have a lot of the same outlooks on music, the mystical, family life, old movies etc.. He’s one of my favorite folks on the planet.

There’s a quote from him in the press blurb about you connecting the dots between “Sandy Bull, Richard Thompson, Bruce Langhorne, and Reggie Young” – how do you feel about that?!

Well, they are all heroes of mine! Not Langhorne as much really, I just recently discovered the soundtrack he did for The Hired Hand which is remarkable. But Sandy Bull, Reggie Young, Richard Thompson? All big influences. I was flattered by that.

Fascinating stuff and so refreshing to hear political and cultural currents enter into music. I must say reading about it added a new dimension to the music for me.

Apart from Tyler’s endlessly enjoyable and unselfconscious technique, the album is improved further with the judicious addition of pedal steel, fiddle, cello and bass (as mentioned, some great brass too, to uplifting effect on the closer ‘The world set free’, recalling the band Tyler has played with for years, Lambchop). And the production (by Lambchop compadre Mark Nevers) is lovely and spacious, as befits an album about how to live on a vast continent.

This album is a stirring and emotionally involving set of tunes which shows the mark of all great instrumental music – not only do you not notice the absence of a voice, but it manages to produce an alternative type of voice out of its arrangements. A five-star, gold-plated classic for this or any era.