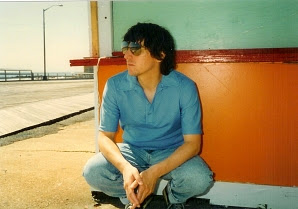 "When I listen to East River Pipe I not only hear beautiful melodies and words, but I also hear the personification of pure, unfettered musical thought, brought about by a commitment to concentrate solely on his craft and his art. This is the sound of a man completely focused on the task at hand, not sidetracked or swayed by any outside forces, be they record labels or any other aspect of the music industry. This is the sound of a man whose only musical relationship is that of sound to tape recorder. Because he chooses not to perform live, he further reinforces the significance of this relationship between a man’s ideas and the form in which we are able to perceive these ideas. He knows that when he makes a record that “THIS IS IT, this is all there is.” Pure. Simple. Perfect."
Kurt Wagner, 1999

It must have been on the inside cover of Lambchop's 1997 album Thriller that I first saw the name FM Cornog. It was there three times. I was a bit obsessed with Lambchop in the late 1990s, so finding that someone not in the band was responsible for writing three of that album's songs was definitely notable. I also remember coming across East River Pipe in Stewart Lee's album reviews (which were always worth checking) in The Sunday Times around then. In a pre-internet age, those names lodged dormant, one of those bands you mean to come back to some day.

That day came for me last autumn when news arrived of the reissue of The Gasoline Age by Merge Records, as part of the label's 25th birthday commemorations. First released in 1999, The Gasoline Age could be viewed as a kind of companion piece to those late 90s Lambchop albums, Thriller and What another man spills, containing as they do five FM Cornog songs between them. It is an album literally full of the highest quality songs and, more particularly, songwriting. There's a kind of street poetry to it, dirty realism you might say that's vaguely related to the writing of people like Charles Bukowski or Raymond Carver - the songs are about ordinary people up against the odds generally, striving, fighting, trying to escape a humdrum existence, sometimes deluding themselves in the process. Invariably, the characters in the songs are portrayed with a distinct generosity, even when they suffer indignity or apparently deserve ridicule. The songs resemble short stories set to music, which consists of perfectly poignant and sympathetic arrangements of keep-your-chin-up guitars and synths, occupying some glorious corner of (let's call it) alt-rock.

I was so blown away by the songs that I made contact with FM, wondering if he would have time to answer some questions. In keeping with the treatment of the characters in his songs, he was generous with his time.

Hi FM, thanks very much for taking the time.

Where are you now and what’s the view?

I’m sitting in my car in a Home Depot parking lot in New Jersey. I’m surrounded by sprawling, nondescript, brick warehouses. A few sparrows overhead on the telephone wires and fiber optic cables. 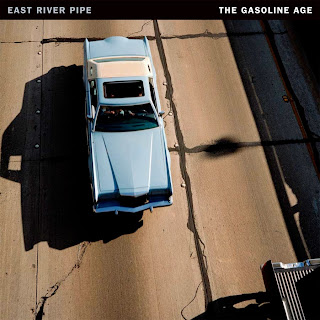 I’m enjoying The Gasoline Age a tremendous amount, it’s great to see an album as good as it get a second life, so to speak. Can I ask you about the concept behind the album, in so far as there is one.

I don’t think that the concept behind The Gasoline Age is any different from my other albums. I generally write about people who are trying to psychologically, physically, or spiritually escape from present day America. These people feel disillusioned. They feel trapped. They try to escape however they can, by driving, or by drinking, or by chasing an unobtainable dream, or by self-delusion, or by doing drugs, or whatever. Sometimes they don’t even know what they are trying to escape from, but subconsciously they feel that something is deeply wrong. They can’t or don’t want to join the society that surrounds them. They feel like the “American Dream” is bullshit, a mirage. You’re told that there are all these roads and all these highways and all these myths about “freedom”, but somehow, there is no escape.

Several of the songs are tied to themes and conceits related to cars and driving. ‘Cybercar’ is one song that particularly stands out for me. It seems to belong as much in a literary tradition (part Philip K Dick, part JG Ballard maybe?) as a musical one. Can you remember your thinking when you were writing the song?

So would you say that you’re a chronicler of life as it happens around you?

Yes. I write about the people and things I know. The people and things I see every day. Quiet people who are trying to scratch out a living. People working little jobs and trying to survive with a little dignity. People trying to hold onto a few little shreds of idealism, or small dreams they once had. People who are haunted by the past. People incessantly bombarded by commercialized information who are starting to think that something is very fucked-up, but they don't know what it is or how to change it. I write about the people living on the lower rungs of the American ladder. Those are my people. But I am clearly not a spokesman for anyone. I only speak for myself. And I speak in such a coded, private language that most people, including music critics, have never deciphered the depth of my societal disgust. If the music itself truly reflected my lyrical content, the songs would be unlistenable. The accessibility of my music is what makes my lyrics easier to swallow.

How do you reflect on the album now in general, in the context of your other albums and at a remove of 15 years?

Honestly, I never thought that there was anything special about The Gasoline Age, and I still don’t. I don’t think the album is any better or any worse than any of my other albums. Maybe the recurring “car” motif in that album made it more accessible and cohesive to some people? Who knows? But to me it’s just another album.

The reissue comes with a bonus of 9 previously unreleased tracks. Can you tell me a little about those and why you picked them? They’re drawn from your recording archive in general over the years, and not just the sessions that produced The Gasoline Age, is that right?

The bonus songs were recorded over different periods. Some of them, like ‘How’s It Feel To Piss It All Away’, were recorded in the last year, and others, like ‘WTC’, were done years ago. Most of the bonus songs never seemed to fit on any albums thematically or musically. Those songs were orphans. I didn’t want any of them to be released, but my wife insisted that they be released and she won the argument.

Going back a bit further in time, can you tell me about how your initial connection with Merge Records came about?

Well, back in the early 1990s, Barbara Powers (who was then my girlfriend, and is now my wife) started a label called Hell Gate Records solely to release East River Pipe music. She released the music as homemade cassettes at first, then as 7-inch singles. We sold many of those releases through a mail order company in Chicago called Ajax Records. Ajax Records was like the epicenter of cool, American “indie rock” at that time. Just to be in the Ajax Records catalog was a big thing back then. Anyway, one of the people who bought some of those early releases was Jim Wilbur, the guitarist in Superchunk. Jim wrote me a nice letter. So, that led East River Pipe to Merge Records. I’ve been on Merge now for 20 years.

I’m interested in your working process for recording. Is it a case of whittling away for months, as might be the case with many home or self-produced recordings?

No, I don’t whittle away for months. That sounds fucking tedious! But I do work kind of like a painter, I guess. I paint something, then I walk away, then I add something, then I walk away, then I paint over the first thing, then I walk away; on and on, add, subtract, add, subtract. I tend to work pretty quickly, but in spurts of two hours here, two hours there. It’s a terrible way to work, because I can never really get up any serious forward momentum. It’s like a guerilla war…Attack, retreat, attack, retreat. But that’s the way it must be for now, because I work a full-time “day job”, I’m a father of a 12 year old girl, a husband, and the owner of a small, beat-up house.

You’ve played very few live shows over the years. Why is that and is there any change in plans on the cards on that front?

There are so many reasons that I don't play live. But the main reason is, and this cuts down deep to my very nature: I have never liked being the center of attention. I don't like to stand in the middle of a stage with a spotlight on me with a hundred or more people staring at me waiting to be entertained. It makes me feel like a cheap, wind-up monkey.

Your connection with Lambchop is one that will be known to many people, in that several of your songs have been covered by them. How did that contact first come about? Do you keep in touch with Kurt Wagner and the band? I assume you’re a fan?

How did the contact first come about? Well, in 1994 I recorded an album called Poor Fricky, and I heard that Kurt Wagner liked it a lot and that Lambchop was planning on recording 3 songs from it. Those songs, 'Superstar In France', 'Crawl Away' and 'Hey, Where’s Your Girl' came out on the Lambchop album called Thriller. A year later Lambchop recorded 'King Of Nothing Never' and 'Life #2' for their album What Another Man Spills. So, Kurt Wagner has been incredibly generous to me. I see Lambchop play anytime they are within a hundred mile radius of New York City. I love those guys. They are a truly unique collective. Singular. They understand the space between the notes, the pause, the silence. Very few musicians can grasp that.

The Gasoline Age was reissued on Merge Records in October 2014

My review of The Gasoline Age here