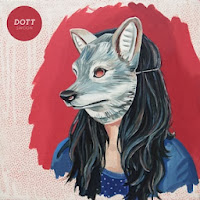 One of my favourite albums of recent months was the debut by Galway's Dott, Swoon, a beautiful and stirring combination of garage pop and brilliantly delivered female vocal harmonies. I had the chance to see the band play live in Cork last month too which I usually find adds value to listening to any album. This was my review of the gig for WeAreNoise.

Galway’s Dott were just setting up, a selection of multicoloured dot(t)s adorning the stage area suggestively and attractively. They came armed with debut album Swoon, although minus the official CD copies which had apparently suffered an unexpected rerouting to India. In compensation, singer Anna McCarthy announced that she had personally handmade 50 CD’s specially for the gig to go with the beautiful vinyl pacakges on the merch stall.

I was soon doing some swooning of my own as one of the star vocal turns from the album, ‘TEFL’, was rolled out early complete with a capella opening and handclaps. The chorus takes something from The Ronettes’ best with its inspired backing vocal brought to the foreground, while the lead vocal swoops around without a care in the world – or to be more accurate, with every care in the world as the protagonist’s ex has taken off with the titular TEFL cert in back pocket. All this against a backdrop of crunching guitars and pounding drums, making for effortless, rollercoaster pop music. There was even a “doo-wop” in there for approaching-perfection status.

This impressive vocal work set the tone for the gig. Later, the tremendous developing harmony lines of ‘Cherry blossom’ were delivered with aplomb by McCarthy and bass player Laura Finnegan. ‘Love you forever’ was another vocal highlight, its irresistible ba-ba-ba mid section coming after a dead stop and 1-2-3-4 restart. Meanwhile, its muscular, snaking rhythm (which has a little of Juliana Hatfield about it, as does album lead track ‘Day that I found you’) puts an entirely different complexion on the song than the title would suggest...not to mention these lines - “maybe I could build a house with you and let you be my wife.” The sound took a little while to grow into the room but had moved from rare to well done in time for the absolute classic kiss-off of ‘Rain day’. Possessed of another driving backbeat – do-do-do bassline with tom-filled drums – the chorus delivers a glorious rush:

“It’s over
Developed like a double exposure
You never got a good picture of me
So stick to your amateur photography.”

I don’t think it was just me, those lines rang around the room after the last chord had fizzed into oblivion. If there’s any justice in the world, they are also coming to a radio near you soon.

As the album suggests, the live sound drew on 90’s American power pop/alt rock. Accordingly, the majority of the set was conducted at fast pace, with plenty of satisfying power chords and some lovely, percussive drum work.

Apart from being a fine songwriter, Anna McCarthy also has the kind of voice that can carry in a live setting, the kind of voice you can believe in. In an age when simply emoting is often mistaken for skilful songwriting, it is positively refreshing to hear a singer using pop’s back catalogue for inspiration to write her own classic-sounding melodies.

What is equally refreshing is the tone of the songs. They are mostly about love lost and gained, and its attendant dreams and fantasies, but delivered with an appealing mater of factness – although without sacrificing a certain tenderness when called for. On top of that, there’s plenty of brio in the delivery which means the dreaded tweeness doesn’t get a look in. In fairness, the sharpness of the lyrics, like the ones quoted above, wouldn’t allow for that anyway.

McCarthy was an engaging, entertaining front presence for the night too, stopping at one point to explain the magic wink she was required to exchange with drummer Tony to signal an intro. And in thanking The G Man for hosting the show, she claimed she had never been treated as well by anyone – before hurriedly adding, “except my boyfriend”, motioning to Evan on guitar, to general hilarity in the room. They also dispensed with the walk-off routine, informing everyone that they would be playing two more songs before finishing. It was an appreciative if sedate audience and the numbers were healthy, especially considering competing attractions.

Dott came across like a band stretching their legs who will only improve on the back of this tour. Comparing the live arrangements to those on the album, I would have liked to hear a little more light and shade in places. The most memorable moments for me were the ones broken down to highlight vocals, or driven along on just a bass and a drum. However, the quality and delivery of the songwriting completely won the day in the end.

Yep, it was one of those gigs that added value to the recordings alright. After the gig I listened through to the album for another few weeks and the songs just improved on every listen. So I decided to do something a little different in the way of a review, again for WeAreNoise.

I’ve been listening to the debut album by Dott for about a month now and it just gets better and better. Having already seen the band live last month in Cork and written a review of that gig (this piece should be read as a companion to that), I thought I might do something different on the album. The more I hear it, the more I am blown away by the songwriting, and the way the arrangements take the emotions of the songs and amplify them. These are songs of love delivered with passion by a woman not cooing in your ear but not afraid to bare her soul. And they trip over gorgeous, hummable melodies in the process. It’s a combination I really think could win the whole world over.

So here’s a track by track on Swoon – listen as you read, preferably.

Small pony
The album’s opening song and first single and a superbly chunky intro to the world of Dott. One of my favourite moments on the whole album comes at 2.18 – those woo-hoo-hoos make my day every time.

Day that I found you
There’s a lovely, slouchy, low-slung groove to this song and some great reach-for-the-ceiling, open throated singing from Anna McCarthy.

Rain day
Another wonderfully barbed pop song about love wrapped in the sweetest harmonies and a plot concerning going to the beach and losing your keys. At the risk of repeating myself, has there been a better chorus in 2013 than this?

TEFL
The yang to the yin of ‘Rain day’. Those vocals. Those harmonies. Those words.

Every night, Every day, Every week, Every hour
I’ve been thinking of your face again

And the fact that the song contains the words “shitty redundancy”. And the closingE-A chord shift.

Leave tonight
A great rumbling bassline distinguishes this. There are also some more woo-hoos (you can never have enough) and the bank of backing vocals again creates a glorious wash. It’s so infectiously joyful without really trying to be. It’s all over in less than 3 minutes. Woo hoo is right.

Talk to you
A delicious slow burner cloaked in feedback with (unusually) a restrained lead vocal. This works brilliantly as the guitars thrash and the drums pound underneath.

I love you too
Further sweet admonishments to a deserving ex. You imagine it might be a pleasure to be in receipt of such a fizzy, fuzzy kiss off. The slowdown around 1.50 with developing harmony oohs is one of the highpoints of the album...and my year.

Start all over
Knock out opening of another rumbling bass and tom-filled drum pattern. McCarthy’s sincere chorus vocal is as refreshing and bracing as the breeze off the Lee in November.

And Jesus, it means so much to me to know that ba-ba-ba’s have not gone out of fashion.

Last summer
We met at the pool hall when I beat your score at the pinball machine
A classic Ellie Greenwich-style opening announces an up close and pleading lead vocal, as jangly guitars play against a bass solo. Brilliantly authentic and genuinely universal songwriting.

Cherry blossom
There’s always a place in my heart for songs which take their title and repeat it over and over. To pull it off, there needs to be enough oomph and guile and conviction about the arrangement. And...there is. Hurrah. I close my eyes and think of you in my sleep, while crashing guitars and pounding drums (plus that lovely clicking rimshot bit) play in the background, as it were.

And don’t get me started on that developing harmony...

Another summer
A slightly sentimental ballad to sign off but as far as I’m concerned they can do whatever the fuck they like after the quality of the preceding 34 minutes. You’ll find the chorus still compensates with another beautiful melody.

I’ll leave it there except to respectfully suggest that you need this album in your life.

Finally, I also did a Q&A with Anna, the lead singer and songwriter in the band, for WeAreNoise. Among her answers was this refreshingly upfront reminiscience of her first time on stage. It gives a good idea of the spirit behind the band, I think.

Can you remember your first time being on a stage with a band?
Yes! My friend Anna and I went to this “Rock School” called Fuse in the Crawford in Cork one summer when I was 17. I met some guys from Kinsale there and started doing guest vocals with their band at their gigs. We used to do an awful cover of ‘Weak as I am’ by Skunk Anansie at gigs like the Blast gigs in the Half Moon. But then they started learning my songs and in the end they became my band for a little while. We played our first gig in Connolly’s of Leap with Silo who went on to become Fingersmith. But Fuse was really great because I got to meet Ashley Keating from The Frank and Walters there. He was an amazing support when I was starting out. He convinced me to record a CD and helped me through the whole thing. I didn’t have a clue what I was doing. I went into the studio with nothing but an acoustic guitar and was like “I’d love some drums on this”… so Ashley very kindly played drums on my first demo! He’s a legend.
Dott Galway Graveface