Ezra Furman - My zero (from Day of the dog, Bar None) 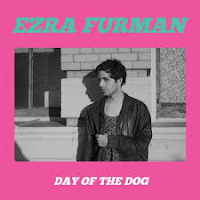 Every year, something gets overlooked.

In 2012 it was Ty Segall. Last year it was Ezra Furman (I'm sure others will emerge). I've been catching up on his Day of the dog album for the last couple of weeks and it's a keeper.

It's great to hear an album with such freshness and, I don't know, abandon or something. There are shades of The Modern Lovers and even Violent Femmes here and there but Furman's voice in particular is all his own - brilliantly strained, reaching. There's not enough of that in pop music.

Although, as it happens the album standout for me is an example of him reining it in a tad, the completely convincing, slow-burning 'My zero'. It starts off like a slightly-too-fast ballad, nostalgic for times gone, but is soon ushered into daytime radio league via an irresistible chugging sax, one-string guitar riff and swooning fiddle part.

Have a listen - you'll be singing it out loud all day, all the better to dislodge that other useless shit that's been clogging up your ears.

One of the songs of last/this year.

*The whole album has a compelling air about it, cutting across anti-folk and punk pop. A blues stench, a howl, an irreverence, a sidelong glance at the modern world, a kick up the arse.