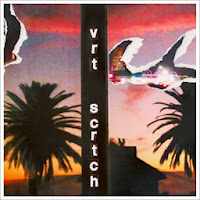 New outfit of John Schmersal (ex Brainiac and a live member of Caribou). The band name refers to the plastic scratch of plectrum on unamplified electric guitar strings, a percussive sound which is foregrounded throughout this album.

There are 15 songs here in just over half an hour and hardly a guitar solo or distortion pedal in sight. There’s also a frantic intelligence at work which might put you in mind a little of They Might Be Giants but the songs bear all the (wonderful) hallmarks of The Kinks, channelling the spirit and tone of Ray Davies as their core influence, although with some other worthy reference points supporting.

And there are many good songs. Like ‘Pretend u are free’ with its falsetto strangeness conjuring XTC gatecrashing The Beach Boys. The uncomplicated, gentle psych folk of ‘Rainbows’. Or the lovely fuzzy boogie of ‘Someone’, which has some of the shambling genius of Guided By Voices about it (in fact, Robert Pollard himself crops up with guest vocals on another song, the quite GBV-ish ‘Get along like u’).

I would say it’s a little hard to listen all the way through in one sitting because of its unrelenting tempo. But it does the heart good to see a little corner of the world still devoted to searching, off-kilter pop music.