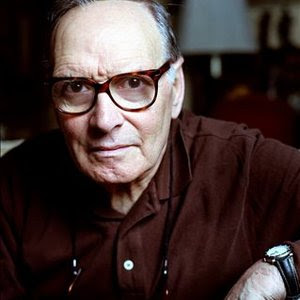 So, me and Ennio on Valentine’s Day (for which a huge thanks to my wife, a most magnanimous gesture on her part, you might even say a bromantic one).

I’m in general wary about film music taken out of context but those doubts are suspended when it comes to Il Maestro. He didn’t just compose the music, after all, he also arranged and orchestrated all the parts in most cases, plus here he is conducting the whole shebang as well.

And it really was something to witness the power of about 130 souls on stage (the size of the audience at many greast gigs I've seen) harnessed in this way - two Hungarian choirs, 75 strong, the balance made up of the superb Czech National Symphony Orchestra.

Maybe not the full scope of his work was on show (the programme was light on the dreamier end of his back catalogue, and sadly absent were the sumptuous psychedelic wig outs) but a fair spread was presented, from the lyrical or romantic (Tornatore) to the strident galloping rhythms of those iconic Sergio Leone westerns, and taking in detours into jazz and pop music reflecting Morricone’s early work playing trumpet in post war big bands to American soldiers.

The first half was dominated by the Leone soundtracks, particularly the absolutely gut wrenching human drama of ‘Jill’s Theme’ from Once Upon a Time in the West, the operatic soprano of Susanna Rigacci soaring to the roof above strings and choir. For a piece not in my top ten of Morricone before now, the sheer emotional heft of it meant that no knowledge of the film was needed in order to be cut in two by this music.

‘The Ecstasy of Gold’, another masterful use of the voice as an orchestral instrument with the choir suggesting the inevitability of destiny (or something like that).

And the delicious ‘Chi Mai’, a piece I have regarded in the past as elevator music (a Morricone elevator is still a thing to cherish) but in the flesh it showed all its nuances brilliantly.

*One point here, to carp slightly. The Main Theme from The Good, The Bad & The Ugly included the substitution of clarinet and trumpet for the yodelling human voice in those legendary opening bars. To me, this was far from satisfactory, a gentrification too far. We’ll let him off with the whipcracks and the whistling, health and safety like...

The second half of the show did not actually have as much for my taste. I would have preferred more of the drifting dreamy side of him - like the epic ‘Come Maddalena’ for example from the film Maddalena (promised in the tour programme but cruelly, from my point of view, cut from the Dublin set), a gem of twisting interlocking and swapping melodies with the glorious upfront female voice of Edda dell'Orso which is like nothing else but a sigh in musical form; or anything from Vergogna Schifosi, a glorious dream pop dream of a soundtrack full of teasing key shifts and major seventhness.

But there were some beautiful compensations. Three pieces from the soundtrack of the recent The Hateful Eight were rolled out with a great ominous quality, particularly the wonderful woodwind heavy ‘Last Stagecoach to Red Rock’ (there was a layer of irony too, if you chose to see it, in the good burghers of Dublin - and many other parts, a couple of mature gents on the Luas back into town afterwards had travelled specially from Manchester because it was cheaper for them than going to London - rattling their jewellery to a track titled ‘Bestiality’).

And The Mission to finish, presumably for the reason that it might be his best known work. ‘Gabriel’s Oboe’ has never done it for me actually, although ‘On Earth as it is in Heaven’ to close the concert from the same film was a powerful fusion of sacred European music with native South American themes, the percussion section in particular kicking into overdrive with some furious bongo action. The choir at the end coming in to rowdy effect over the stately orchestral patterns was another special highpoint.

The frailty of the man, aged 87 and counting, was a poignant sight, helped onstage each time with minders positioned in the front row in case of any misstep. The distinct impression was that this could be the last time around for this authentic genius. If so, what a legacy he has left behind.
Dublin Ennio Morricone Film Music Point Depot Soundtracks