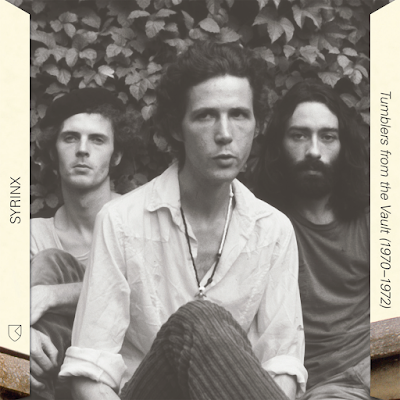 A wonderful archive compilation of this Canadian group’s output from the early 1970s.

There’s an ecstatic quality to tracks like ‘Aurora spinray’ and ‘Tilicum’, a great kosmische bounce that borders on Eden Ahbez-like exotica in places, in others approaching the blissful pastoral haze of Cluster.

All round a thoroughly fantastic slice of the 70s underground (although unexpectedly accessible) and a great piece of work by RVNG Intl.

The two instrumental albums that Syrinx issued in the early 1970s sound little like the psychedelic music prevailing Toronto’s rock venues at the time, and are even further removed from the electronic tape experimentations spooled by a younger John Mills-Cockell.

Instead, the path of Syrinx whimsically veers away from the dominant mode of ‘70s subculture, charting surprising commercial success. Tumblers From The Vault presents their entire recorded legacy, reviving the story of Syrinx and sharing their memorable, mind-bending melodies.

The musicians behind Syrinx were composer and keyboardist John Mills-Cockell, saxophonist Doug Pringle, and percussionist Alan Wells. All three were young veterans of the Toronto creative scene by the beginning of 1970. LSD played a supporting role in their artistic pursuits, but equal guidance also came from Mills-Cockell’s studies at the University of Toronto and Royal Conservatory of Music, where he established an ad-hoc, DIY electronic music course in the school’s basement. Before long, Mills-Cockell was an accomplished young composer and an important conspirator in Intersystems, a rogue, multimedia ensemble that intersected heterogenous artists and musicians via the Toronto underground. In this freeform environment, Mills-Cockell’s compositions found alert ears, among them his primary collaborator Doug Pringle, a wily wind player, and producer Felix Pappalardi, whose credits include Cream’s Disraeli Gears and who helped John land an album deal with True North Columbia.

After Intersystems dissolution, Mills-Cockell journeyed to Canada’s west coast to work on an album of original synth-based compositions using his multi-suitcase Moog as the primary instrument. Pringle was enlisted to color outside the music’s already adventurous lines, his sinuous, signal-processed saxophone adding another electrifying voice to Syrinx’s signature sound. A sound that hybridized chamber music dynamics with wild, yet tuneful electronic melodicism. With Alan Wells’ understated percussion rolled into the fold, what started as a solo venture for Mills-Cockell became a new kind of collective.

From these coastal sessions were conjured exemplary pieces like “Journey Tree” and “Hollywood Dream Trip,” both plaintive and serene expressions of Mills-Cockell’s economical arrangements, and also Syrinx’s restrained and expert use of their electronic resources. “Hollywood Dream Trip” alone presents a theme so memorable and melancholic that it calls to mind Erik Satie, John Cage’s early piano works, and the cinematic power of Golden Age soundtrack music. Syrinx’s self-titled debut arrived in 1970, followed in 1971 by Long Lost Relatives, which is highlighted as the first album on Tumblers From The Vault.

Between the two albums, Syrinx became a vital part of the Toronto music scene, with Doug Pringle’s loft serving as the central node for impromptu performances and the group’s collaborative activities. Syrinx also started receiving high profile work, first for television, film, and dance, and then for orchestra. One commission culminated commercially in “Tillicum”, the unforgettable theme music for pioneering reality television show Here Come the Seventies. As a standalone single, “Tillicum” would climb to #38 on Canada’s RPM charts. The most eventful assignment came from the Toronto Repertory Ensemble’s conductor and composer Milton Barnes, whose solicitation inspired the powerful orchestral suite Stringspace.

The studio version of Stringspace for Long Lost Relatives is a near faithful version to the live performance, the Toronto Repertory Ensemble offering the same sweeping, deeply engrossing symphonic support. (An original live version also appears on Tumblers from the Vault on the third LP, along with other rare and alternate Syrinx gems). “Tillicum” also appears on Long Lost Relatives, a nod to the group’s new visibility, and perhaps an assertion that Syrinx was part of the trailblazing new world that their television theme song signaled.

Syrinx’s music is more than a faded strain in Canada’s consciousness, but has never expanded universally. One modest task of Tumblers from the Vault is to reinstate Syrinx to their place in the wider canon of groundbreaking music so their story can be appreciated beyond the limits of Canadian notoriety. Another task is to simply have this music heard again, which is an endeavor made less difficult by the fact that the most defining quality of Syrinx’s music is its timelessness and agency.

Unlike so many turn of the ‘60s experiments fusing rock and pop music language with new technology, Syrinx was never excessive in expressing their vision of what electronic music could offer. Instead, they blended these sounds in a holistic way, allowing the acoustic and electronic textures to create one organic voice. They opted to foreground the lyrical and poetic content of their compositions rather than their innovative techniques.

It’s a tribute to John Mills-Cockell’s compositions, and his comrades Doug Pringle and Alan Wells, that the tangential path of Syrinx remains as present, exploratory and inviting as ever.

Syrinx’s Tumblers From The Vault will be released on October 14, 2016 as triple LP set, double CD, and digital formats. An accompanying documentary about Syrinx by artist and filmmaker Zoe Kirk-Gushowaty will screen selectively.