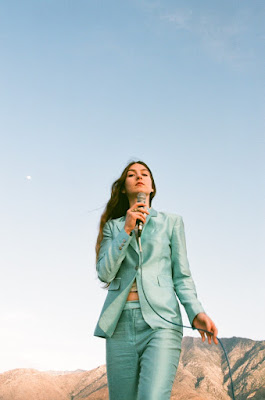 On the most significant weekend in the Christian calendar, there was something appropriate about the primal and even pagan undertones of this wonderful show of live music and (I’m going to say) ideas.

Firstly we must speak about the sheer presence of Natalie Mering on stage (which is only added to by the remarkable sky blue with white clouds trouser suit, a sort of David Byrne meets Pop Art statement). You could call it a certain kind of cool. It certainly comes across as a confidence but with no sense of distance or aloofness to it. There’s a distinct warmth to her stage persona, or we might just say her personality because there’s no hint of artifice, just an easy engaging quality.

Her between song patter also has a distinct air of playfulness. She has a mischievous streak, no doubt about it. ‘Seven words’ is introduced with a wry smile as “seventeen words...it’s grown another ten words...a lot has happened”. One of the encores (a krautrock classic) is billed as “a more German flavour, something you might have with sausage and mustard.”

In addition the woman is a complete pro when it comes to “managing” an audience. That is to say, acting as a kind of usher to introduce everyone in the room at the beginning of the night to the idea of being at a Weyes Blood show, what that will mean and what we can expect from it, then delivering handsomely on the promise that implies.

That description might make it sound like quite a cold transaction. Far from it. Weyes Blood is an artist in the fullest sense of that word, and on stage she is a performer who disappears into the music. There are few more inspiring sights in recent memory than Natalie Mering, eyes closed, head back, singing one of her ageless tumbling melodies.

And there are so many of those, particularly from last year’s exceptional Front row seat to Earth album. As well as the gossamer light ‘Seven words’, there is the plainly beautiful love song ‘Be free’, the tightly coiled melodrama of ‘Used to be’, the elegant psychodrama of ‘Do you need my love’, and most of all the gathering power and pull of ‘Generation Why’.

An early folk sound is a certain reference point when you hear the songs on record, but in person those same songs form much more of a surrounding psychedelic pop experience - there's a shimmer to them, a sway and a pulse. As if to bring that point home, Ms Mering asks for suggestions at the end of the gig for her few days break in Ireland, this being the last night of the tour – “we want to go somewhere pagan, haunted”. Mischievous.

Let’s not neglect the woman’s voice. It’s a superb natural instrument free of vibrato, endlessly convincing and perfectly capable of ruling the mainstream airwaves (or bandwidth or whatever).

A word for the band (whose names I didn’t catch, apart from Jack Ladder on bass and support keys, who also played solo support on the night). The drumming was delicious. He worked his way into the set, you could say, the early songs consisting of the more stately rhythms, until letting loose later on during the freaky section of ‘Do you need my love’ and especially during the genius encore selection of the Can song ‘Vitamin C’, all jerky tom offbeats and deep ride crashes. (The encores also featured another glorious buried treasure from pop’s past in the shape of Mike Oldfield’s ‘Moonlight shadow’.) And the solid as anything keys man doubled brilliantly on lap steel for the swooning mid section of ‘Seven words’.

All in all, this was a memorable gig and left a tantalising sense of a genuine star presence.

*Furthermore, Weyes Blood being the very epitome of a star, it is not difficult to imagine a career trajectory for her similar to, for example, Beach House (or The National or St Vincent), in which case bring on 2019 October bank holiday weekend and the Weyes Blood Irish tour taking in Vicar Street, Cork Opera House and beyond.