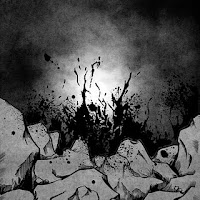 We spoke about the above mini-album recently, a companion to the current Doomed Bird of Providence album, Will ever pray, which is wonderful. Well there's more, in the shape of a Sone Institute remix of the same track. You need to go here to stream it.

It's very woozy without losing any of the drama of the original. By the way, as you're at it, check the Sone Institute album of last year, Curious memories, and the Dollboy meets Sone Institute collaboration, The sum and the difference, both on Front & Follow. This is what I thought of them at the time, with listening links added.

Beguiling album of Burt Bacharach tones and gorgeous orchestrations, in among the cut-and-paste glitches and samples, from one man electronic wiz Roman Bezdyk.

Here's the absolutely sublime French woods from that album.

Continuing the fantastic furrow they've been ploughing for a while now, the Manchester-based label release two collaborative projects. LDWR features the work of 14 different artists from around the world (including Isnaj Dui, Ken Peel, Leyland Kirby), who were each sent some basic sound files to mould in their own direction. The resulting 14 EP's have now been compiled into one box set, which would fall into the "worthy" category if it wasn't so fascinating and ambitious musically.
The sum and the difference combines the talents of Oliver Cherer and Roman Bezdyk, swapping and re-working each other's material, to create a hazy, drifting 15-odd minutes of pure loveliness. It acts as an interesting companion piece to Mr Bezdyk's (Sone Institute's) brilliant Curious memories album from earlier in the year. As usual with F&F, the artwork by Damian O'Hara provides another compelling reason to invest your money. Highly recommended.