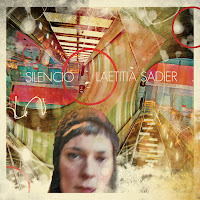 Well, I've been away for a few weeks but what a lovely pile of music there was waiting for me when I returned.

Let's start with the wonderful Laetitia Sadier, back with her 2nd solo album. The Trip was great and so is this. She's probably forever destined to be referred to as the "ex-Stereolab frontwoman" but she's rapidly carving her own identity post 'Lab.

The first song, 'The rule of the game', takes issue with the rise of fascism, taking inspiration from Jean Renoir's film La Regle du Jeu. That might sound like a dry topic but don't worry, there's room for a breezy, Brasil-pop playout which would get anyone up marching in protest. The video (below) also features Laetitia in an intriguing synchronised swimming set-up. 'Auscultation to the nation' takes similar aim at the anti-democratic activities of ratings agencies, but within the parameters of a glorious post-Morricone bop. In between, 'Find me the pulse of the universe' takes on the Brazilian theme with her signature sound of lovely, jangly, open-strummed guitars.

Around the middle of the album, I love the dreamy, bossa-fied 'Moi sans Zach', Laetitia ad libbing (sounds like it anyway) in French about life, existence and ham sandwiches (if my Leaving Cert French isn't mistaken). Once again, the beautiful, drifting backing vocals take the tune to another level.

The closing 'Invitation au silence' is an audacious sign-off. It's a dual monologue, semi-whispered in French and English, on the nature of silence, which was recorded in a church in south-western France. Amid the atmospheric background ambience, it suggests we "sample some silence...(and)...listen how resonant with truth silence is.”

Deep without being po-faced, engaging but no pushover, it's a perfect reflection of this gorgeous, multi-layered album.

Laetitia Sadier "The Rule of the Game" from Drag City on Vimeo.