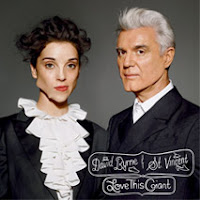 The new collaboration between David Byrne and St Vincent is definitely one of the musical events of the year for me. Apart from the album, they've also just begun a US tour with a 16-piece (I think it is), mostly brass, backing band. That's just shit cool. Here's some fan footage from their gig in Minneapolis the other night for a flavour, as they run through some Talking Heads and St Vincent material, with some interesting choreography.

Having had the album for a few weeks now, it's as obtuse and angular as you might expect from two people who each pretty much define the phrase "singular artist". There aren't that many straightforwardly upfront tunes on the album (the brilliant closer Outside of time and space is one exception, where the brass backing takes on a plaintiff colliery band feel). But it's still never less than engrossing and the everpresent brass and reed textures give it a wonderfully offbeat tone, compared to the majority of the meat-and-drink indie landscape.

Here's some footage of the pair explaining how the collaboration came about.

This is footage of their performance of The forest awakes on the Jimmy Fallon Show recently.

This is Weekend in the dust, a funky jam where St Vincent's vocal delivery gives a cautionary edge to the party atmosphere.

And the first single, Who, where the brass is upfront and personal, right alongside the dual vocals.