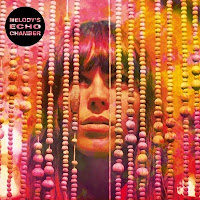 This song came into my life last week. And at the moment, it feels like my life is divided into the time before I heard it, and the time since. It's a fantastic slice of dreamy, bittersweet psych pop that is liable to haunt/soundtrack your waking hours.

I've become quite obsessed with the way the bass and keys enter at different points to competely shift the mood of the arrangement.

The woman responsible is Melody Prochet. My information on her is quite sketchy. She may or may not be French. Her debut self titled album comes out in November on Weird World (that already spectacular little label, only just over a year in existence) and was partly recorded in Perth with Kevin Parker from Tame Impala. There is something of that band's dense sound about the tune, although more about this track (all effected guitars and dropped snare beats), a 7" from last summer on Fat Possum (another fine label), which is also great. It's a bit like a Grizzly Bear tune pumped up, and sideways, a few notches.

This next track is on the other side of that and is again centred around Kevin Parker's distinctive, suspended bassline, undercutting the dreamy vocal. All kinds of club remixes are suggested, although its looping breakbeat on its own would be enough to fill plenty of floors.

I can't wait to hear the album. On the basis that Weird World haven't backed a dud yet, it should be worth hearing, to say the least.
Kevin Parker Melody's Echo Chamber Tame Impala Videos Weird World