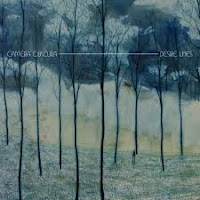 One of my favourite albums of the 2000s was the third from Camera Obscura, Let’s get out of this country, which featured the peerless pop-referencing-itself ‘Hey Lloyd, I’m ready to be heartbroken’. I must admit that I didn’t bond as much with their following album, My Maudlin Career, but I’m delighted to report that Desire lines is back up with their best and (in the best possible sense) most lovable work.

From the sprightly but sad single ‘Do it again’ (“can you see the tears of this clown?”), to the endearingly chipper melancholy of ‘Troublemaker’ (“On a cold morning you arriving, I’m struggling for survival”) and the absolutely sublime heartbreaker ‘Break it to you gently’. Add in the slow dance beauty ‘This is love (Feels alright)’ with its insinuating saxophone line, steeped in a Scottish Motown atmosphere. The wrenching tribute to lost friends ‘William’s heart’. The touching machismo of ‘New Year’s Resolution’ – “I’ve been cool with you and the sooner you admit it I will too.” The woozy, blurry, beautiful ‘Cri du coeur’. The salacious break-up song ‘I missed your party’, with grinding horns and veiled regret. We could go on, there are 11 songs on the album (plus the instrumental ‘Intro’), every one a glorious, uplifting pop song. (It’s tough to leave out the title track, adorned with weeping steel guitar.)

Traceyanne Campbell’s voice has never sounded better, crisp and warm, the delivery always self-deprecating, the songs usually bittersweet (that word again), the arrangements intimate guitar stabs or Hammond organ here and sweeping synths and reverb there, making great, sweet uplifting (that word again) art out of heartbreak. I don’t mean to belittle it by saying that, it’s important cultural material this. It is also the best Camera Obscura album yet I think, which automatically makes it one of the albums of the year, and probably the decade.