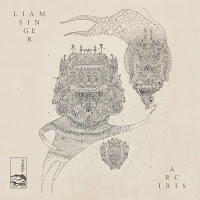 I was a huge fan of Liam Singer’s last album, Dislocatia from 2010 (you can find an interview from around that time with Liam in a piece here which includes a review of the album). It was an album of chamber pop that managed to be both delicate and thrilling at the same time. A good trick that, one you might associate with The Beach Boys for example. For this album, Singer has extended his range to create an even headier brand of dreamy, cosmic pop while retaining the classical shapes that add such emotional heft.

The songs unfold themselves in no verse and chorus format but as miniature symphonic movements, driven by one main piano or keyboard generally, with key and stunning second-vocal contributions from Wendy Allen of Hidden Shoal labelmates Boxharp. And once more, her Boxharp partner Scott Solter produces, providing an intriguing sound bed for these off-kilter pop creations. The album overall portrays a kind of rarefied, heightened atmosphere, as with Dislocatia the distinct sense of deeply felt, autobiographical stories. Not that there’s ever any hint of self-indulgence, but any danger of that is dispelled anyway by the constantly questing arrangements. The first single ‘Stranger I know’ shows this from the start with its dancing piano and wonderfully wrongfooting mid-section rhythm.

‘O Endless Storm’ has a shade of Michael Nyman’s early Peter Greenaway soundtracks in the brilliant combination of flute and a floor tom layered with a tattoo of handclap percussion. The sumptuous instrumental piano and cello interlude that follows, ‘The dance of Cupid & Psyche’, showcases Singer’s own claims to soundtrack majesty.

‘Dear sister/Gears turn in gears’ contains many memorable elements in its family psychodrama, of which maybe the most memorable is Allen’s haunting, wordless vocal, swooping its way over Singer’s restless keychanges like a seagull sailing on the wind. ‘Forever blossoming’ provides another Allen vocal highlight, when an irresistible piano run and heartwrenching melody are completed by a brilliantly light and airy folk lilt.

From the second half of the album, the gorgeous up-and-down organ figure of ‘Unhand me (You horrid thing)’ stands out, simulating the giddy movement of a fairground carousel, and like that, both pleasing and disorientating, in line with the ambiguous sentiment of the lyrics.

Near the end, ‘Coma Nocturne’ has the feel of an Italian folk tune about it, a bittersweet waltz of piano and mandolin, an arm around the shoulder to raise the spirits.

This is an album of story songs circling around themes of family and relationships. For these subjects, chamber pop might be the perfect vehicle, having both the intimacy and the emotional sweep to carry off the subject matter. And they are sad, uplifting tunes. Chamber pop is a lonely enough furrow to be ploughing in the world we live in, I often think. It’s consoling to know that an artist of Singer’s restless talent continues to make a mission out of charting a kind of Venn diagram between classical, folk and pop musics. This is another marvellous album in that ongoing project.