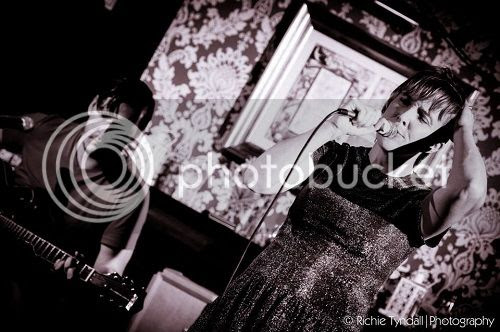 I had the great pleasure of seeing Cat Dowling play live in Cork the other week, as part of the excellent Coughlan's Festival lineup. As you know, her debut album The Believer is one of my favourite things this year. It was great to hear those songs in the flesh (about seven of them anyway). Here's what I wrote about the gig for WeAreNoise.

Cat Dowling arrived onstage (joined by collaborator Gerry Horan) on Sunday evening with no fanfare and set about charming the pants off the seated audience with both her demeanour and a set of beguiling tunes from her wonderful debut album The Believer.

In this kind of living room, we were given a lesson in soul. And for that purpose, the songs sounded even better whittled down to the bare bones, which were provided mostly by Horan. Namely, straight ahead piano chords and some great Gretsch work, verging from the muscular (‘Somebody else’, ‘Cruel’) to the sublimely delicate (‘Come on’, ‘Invisible’, ‘Gospel song).

And Dowling's voice, a magical combination of tuneful and husky, her breath contributing just as much as the melodies.

It was all in the delivery, the transfer of emotion from body to room. She even advanced into the front row for the brilliantly twitchy ‘Invisible’, encouraging people to dance if they felt like it.

Throughout, Dowling maintained an authentic and amiable presence, clearly inhabiting the songs she was singing. At one point between numbers, she expressed the desire to live in Cork one day, despite this being her first time in the city. But nobody in the room doubted it was the truth.

‘The Believer’, so appropriate, she was that rare thing in a singer – completely believable. And a consummate performer.

I also did an interview with Cat for WeAreNoise before that Coughlan's show. She came across as a really refreshing personality, very much like the live performance, talking about the inspiration for her songs and pleasure she's getting from being a solo artist.

Congratulations on the album, I think it’s a very fine piece of work. Can I ask you first about the songwriting – the songs come across with a distinct personal touch, is there much autobiography in there or are you adopting other characters?
There's definitely a bit more of me in this record intermingled with a number of worldly characters. This is the most personal record I've written. I used to hide myself behind much more cryptic imagery before but now that I've gotten a bit more confident, I'm happy to come forth and self-reveal a bit more.

The first single ‘Come on’ could actually be a call to arms. I wonder is there a broader societal message going on in that or is it simply addressed to one person?
For sure, there is a broad societal message going on here but I guess there is almost a message for you, me and us all. I wrote it for the underdog of society, the one that tends to get forgotten along the way but I also wrote it for every face on the street. It can be for the individual or group, depending on the needs of the listener.

Who is “The Believer”?
The Believer is the little character within us all who ends up getting crushed by the analytical/linear/practical world we live in. It's the instinctual side of humanity, the side that has been forgotten.

I love the way you seem to inhabit a number of different voices throughout the album. Do you find it takes long to hit upon the “right” voice for a song?
All of the above is totally unplanned. I opened my mouth and sang and the result is what's on the album. It's all fairly spontaneous and I think it probably works because it is so "unthought out".

It strikes me as a really accessible album, mainstream in a good way if you like but without any of the blandness that often goes with that. Did you set out with anything like that in mind?
I wrote a bunch of songs just before we put out the last Alphastates album. I played them to Gerry, the guitar player, and he was blown away (his words). He told me it was the best stuff I'd ever written and I needed to record them. Without his constant encouragement and belief, I'm not sure The Believer would ever have been put into a record. I recorded an album of songs with no agenda the way I like and I'm glad I did.

The arrangements and production are also very impressive. The production is credited to yourself, Gerry Horan and Karl Odlum, were the arrangements similarly shared? Were you working off any particular influence or reference point from an arrangement/production point of view?
Gerry Horan is a phenomenal musician, performer and producer as is Karl Odlum. I had a vision and ideas and they really listened to me. I was really grateful for this. I don't possess huge technical abilities but I do know what I like and I'm very clear about what I don't like. I tried to put my ideas into words as best I could and thankfully Gerry understood and produced it in a way that he loved but was in total keeping with the tastes and vision I had. I'm a huge fan of Gerry's style both as a player and producer.

How did the recording process work itself out? Was it a case of chipping away over time?
We recorded over snippets of time... I was very busy with motherhood and little folk so my spare time was not so ample. I think that's a very good thing. I was a lot more productive and efficient than ever before. There was no time for messing around on this album. I also think the experience recording the other two albums has stood to me.

Presumably the experience of recording this solo album was quite different from being part of a band (Babelfish, Alphastates) but what were the specific differences from your point of view?
I think a lot more is on your shoulders when you go solo. People looked to me a lot more to make decisions which I liked and was ready for. I think I was too unsure of my own creative ideas to voice them before. Confidence is a great thing :)
Cat Dowling