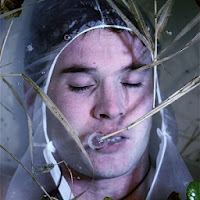 It’s been a vintage year for Irish album releases. O Emperor, Cat Dowling, Biggles Flys Again, The Last Sound, Peter Delaney, Ann Scott, Enemies, Hidden Highways, God Is An Astronaut have all released singular and accomplished works. It’s time to add another one to that list, someone who is likely to be much less known to you than even those mentioned above. Kevin Murphy is an Irishman currently living in Australia, maybe that’s why he’s slipped under the radar of the Irish mainstream media. In line with those others, he writes songs that stay with you, in his case because of an achingly authentic delivery and brilliantly subtle arrangements. Here’s a review I wrote of his album for WeAreNoise a while back.

An unassuming package came through the Noise letterbox recently (I mean that literally, it was a CD).

An indistinct, autumnal woodland cover. The artist's name, Kevin Murphy, the album title LOVEhATE (which I'm happy to report appears to bear no relation to the tv series of the same name).

On the back, seven song titles, that is all. None of the usual raft of contact points. Inside, all the lyrics printed and short and sweet credits. Plus a single soundcloud address (see below).

Immediately enigmatic, and I set about putting a sound to the visual impression.

Here is what I found.

-atmospherics: an oft misunderstood, roundly abused term but here brought to bear with a sure touch in service to the songs.

-those songs, really good ones, dealing with lost love mainly, falling in layers with a dark sensuality and giving something extra each time you listen.

-a beguiling male falsetto voice with a genuine air of vulnerability to it, yet not lowering the common denominator to easy sentimentality for the cheap seats.

-a way with giving lyrical hooks a suitable context; sample the playout of 'Your version' where a closing refrain of "your version of love" rides out on a bass pulse, backwards guitar shapes and stunning vocal harmony layers.

-printed lyrics which do not read like classics on paper but (always a good sign) gather power in combination with the music.

-soul, that thing which is hard to define but which you know when you hear, and plain to hear on every one of these songs.

-the merest, tasty hint of an RnB tendency which doesn't come across as a calculated move but as something belonging to the songs; something of comfort maybe, something describing the emotional state of the singer.

-judicious use of strings, not as window dressing as you sometimes find, but as integral elements of the arrangement, taking flight with the persuasive vocal delivery.

No wonder Domino have just signed on for publishing. These are strong, strong songs with simple, subtly flowering arrangements.

Do yourself a favour and get them into your life.