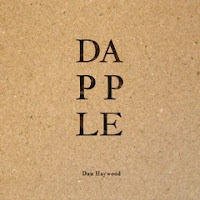 A completely captivating album of English folk songs recorded outdoors in Lancashire with backing of birdsong. Mr Haywood is apparently also an ornithologist so this background bleed was no accident but part of his plan, as he relates here.

Given that Dapple could be set in the 18th century, I was keen for there to be no motor vehicle noise, just in case the listener might prefer to imagine it that way. So the locations had to be out of the way, and some of the sessions started as early as 4am to beat the sound of the Abbeystead gamekeepers’ Land Rovers and Bowland farmers’ tractors. Days on which the breeze might gust above 5mph were avoided, which was good for reducing wind noise and for a preponderance of midges.

Top notch stuff, eh? His singing voice is somewhere between Vic Chesnutt and Latka Gravas; this may not be to everyone's taste but wrapped around these pastoral-historical story songs, I dig it in a major way.