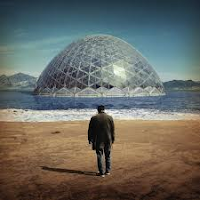 A tremendous album which takes folk music on an intriguing, epic journey.

From the beginning, ‘Silver Timothy’ would remind you of America (the band, one of several songs with those signature close vocal harmonies and brushed acoustic guitars; the vast continent too), although with an added psychedelic, cosmic sheen. In fact the whole album has this feel about it. It’s not that it’s all-out trippy, but inherent to it is a definite step away from accepted reality. It is folk music taken out of the coffee house and brought back into the wild.

‘Metallic cloud’ has a beautiful heightened atmosphere created by a chorus of voices and glockenspiel and topped off by these lines – “you wanna be amazed and see the sky on delay”. With its bar room piano and country soul underpinnings, it’s as if The Band had sat in on The Flaming Lips’ Soft Bulletin sessions for an afternoon. (Come to think of it, a couple of The Band did sit in on the Mercury Rev Deserters’ songs sessions around the same time and the results of that happy marriage aren’t a million miles away from this either.)

‘Return to Maraqopa’ brings the elsewhere-suggested electronics to the fore with a brooding, rumbling bass synth under an impassioned, dirge-like chant.

The filtered hums and whirs towards the end of ‘Magic number’. The theremin on ‘Jericho Road’. The dance-rock bassline and syncopated vocals on ‘Silver Donna’. The wonderful tape echo and struck dulcimer on ‘Silver Malcolm’. The delirious sunshine pop keyboard arrangement on ‘Suns in our mind’. The sublime production of Richard Swift.

All in all, it’s invigorating, soulful stuff and perfectly evocative of the wonders of the universe which it describes.