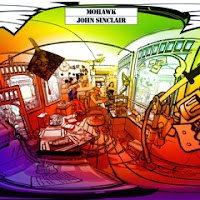 A wonderfully gnarled and worldly account of a jazz session, ostensibly, from June 6th 1950 featuring "Bird and Dizzy and Monk", from this veteran although a new name to me.

The track consists of a Ginsbergian spoken delivery, supported only by a loose double bass and skittering drums (plus an electric shaver momentarily). The term beatnik has developed into something of a dirty word in recent years (decades) - 'Mohawk' brilliantly relocates its true beating heart.

John Sinclair, the renegade Poet, scholar and cultural revolutionary releases his new album on Monday 24th March 2014. John, has been described as an Archetype of the 1960's art, music and literary synthesis, and who today, is still kicking with both feet on his trajectory for cultural transformation. His new record features ten tracks from his book of verse: always know: a book of monk. Twenty poems planted firmly in a single-shot session, and carefully trimmed down to ten exhibits for this album. Beatnik poems, great odes and personal reflections of the Be-Bop jazz persuasion, all flowering together.