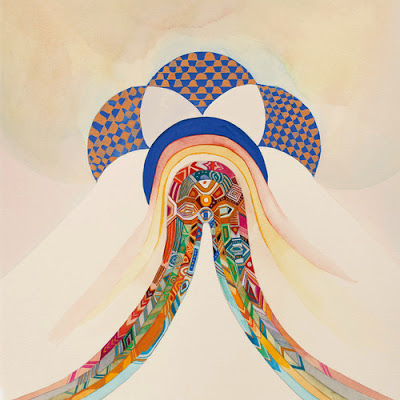 A most endearing album of electronic compositions created on something called a Buchla Music Easel by the Bay Area resident. That’s a kind of synth, basically (I’d never heard of it before), but with a seemingly much wider range of filters, patches and effects. Here’s a demonstration by Smith of the instrument at work – you’ll notice that there’s just as much of a visual appeal to it, perhaps living up to its “Easel” moniker.

Smith’s Twitter profile has her as a “Modular Synth Sound Sculptress and Orchestral Composer” and the scope and ambition implied by that description doesn’t seem far-fetched when you hear the remarkable sounds she creates. The description might prepare you, though, for something slightly dry or academic although nothing could be further from the truth. There is no warning in it of the kind of playful skitter and bounce you meet on the album, particularly over the first 6 songs. ‘Sundry’ or ‘Glide’ for example, with their frantic energy and impossible to pin down but irresistible melodies. The closest thing in recent pop music I can relate it to is the anarchic feel of the pre-4AD material of Grimes, or perhaps the drifting, disembodied showtunes of Julia Holter.

There’s a fascinating conceptual basis to these first 6 songs, an underpinning in euclidean geometry, something Smith apparently picked up from a class she attended at the San Francisco Conservatory.

"We each chose a 3D shape and assigned our own guidelines to the different components that make up the shape. For example each point of the shape represents a different time signature, each line between the points represents a pitch, each shape within the closed lines represents a scale, etc. And then you play the shape."

This would tend to put you in mind of John Cage’s chance scores a little bit. Whatever the intriguing background concepts, this music has a warmth which makes for great accessibility. The tone throughout is organic, you might even say pastoral in places, the kind of kosmische atmosphere that defined the seminal electronic records by Cluster, for example.

This is a wonderful album.

‘Glide’, Track 7 in this playlist