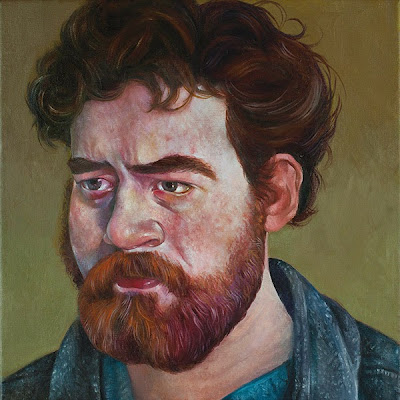 I was put on to Daniel Knox by a friend of mine recently and he’s been a wonderful discovery for me. His third album is self-titled and he’s been around the Chicago scene for a number of years. The best plan is to read this excellent interview and background piece which gives a vivid flavour of the man’s life and work to date, a career which is nothing short of inspiring.

One line from that piece stays with me -

"I actually never sang at all until I was 21 or 22. My favorite singers were Al Jolson and Judy Garland and, to some extent, Maurice Chevalier. So my voice was way over-the-top, with heavy vibrato. But to me, it sounded very natural."

So you might think this is someone not remotely interested in musical currents or trends and you’d be right. (Still, it’s good to know that his talents have not gone unnoticed by such luminaries as Jarvis Cocker and David Lynch.) He’s now in his mid 30s and his voice displays that great quality of unself-consciousness and having been lived in thoroughly. His songs, like all the best, clearly exist to fulfil their own inherent rationale, not for any external commercial purpose.

Piano is his other instrument (self-taught as you’ll read in the above piece) and ‘By the venture’ is the best example I can think of to show off his great feel for it.

It’s a jaunty tune - after the langurous intro – and has something I’m very partial to, a central thread of cabaret or even showtunes influence (perhaps in line with Garland, Jolson and Chevalier although not that you’d identify specifically) creating a real sense of drama, down to the restrained string quartet and later the lovely reed and harmonica interjections.

Lyrically, the song supports the arrangement (other way around possibly) with what might be dark wit – “your house is still there, it looks like garbage” – later transformed into something deeply poignant – “life is a gift, it keeps on giving, see what you’ve done, look where you’re living”.

It’s one of those story songs that will remain under your skin and intrigue you over days and weeks, each listen bringing to light some new inflection in the delivery which is full of pathos and humanity.