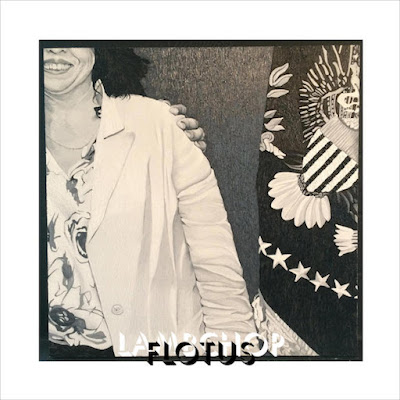 Part 3 of this epic poem, again in no particular order. And as a companion piece, check also this Best of 2016 mix which includes many of these tunes, along with a few from the upcoming Psych section, the final instalment.

1. Tortoise – The Catastrophist (Thrill Jockey)
Another wonderful album from Chicago’s finest and apart from anything else (the glorious hooks, the minimalist chops, the thrilling musicianship etc) a reminder of just how fucking groovy they are.

Marvellous music for the brain and the feet.

2. Syrinx – Tumblers from the vault: 1970-1972 (RVNG Intl)
A bolt from the blue for me and a fantastic compilation of ecstatic kosmische/dream jazz from this Toronto 3-piece.

Also a thoroughly fascinating slice of the 70s underground (albeit unexpectedly accessible) and another great piece of archive work by RVNG Intl.

3. Fixity – Hungry clouds (Kantcope)
Tremendous cut from the very prolific Dan Walsh, a Cork cassette label release but sounding nothing like what you might expect from a Cork release...

...it being a murky, darkened spectrum of sound with stalking atmospheres and a haunted dreamy aftertaste.

*Incidentally, one of three separate Fixity releases last year, all of which are great. Go find.

Track 3 in this playlist


5. Iggy Pop, Tarwater & Alva Noto – As Adam early in the morning/I am he that aches with love (Morr Music)
The poetry of Walt Whitman as you’ve never heard it before, a wonderful collab which recognises one key fact – the unending intrigue in Iggy Pop’s speaking voice – and highlights it with a dramatic lilting electronic bed.

*Plus check the knock out chemistry between it and the on fire Ukrainian dancers in this video.

6. Rothko – A young fist curled around a cinder for a wager (Trace Recordings)
An album that was sent to me towards the end of last year, a collaboration between Johny Brown (of Band of Holy Joy) and Mark Beazley, who has recorded under the Rothko moniker for many years now.

It is absolutely gripping stuff. Try the title track here, it’s only two minutes long or so, then proceed without delay to order the album. I glibly described it as Mark E Smith meets Ken Loach in the blurb on that playlist. Whatever about that, it is a wonderful heartfelt racket.

Track 11 in this playlist


7. Matthew Bourne – Keighley (The Leaf Label)
A gorgeous Moog meditation from the moogmemoryplus EP by the Leeds pianist/composer named after a village in Yorkshire.

8. The Notwist – Superheroes, Ghostvillains + Stuff (Alien Transistor)
Another effortlessly cool, fluid and (crucially) groovy chapter in the story of The Notwist.

Apart from notwisting, the Acher brothers have had their hands in all kinds of fascinating pies over the years. For the first time, here is a live set, recorded in Leipzig in front of a most appreciative audience and it sounds fantastic.

From the opening strains of ’They follow me’ – with its creeping meditative air – there’s a lovely organic mixture of analogue and digital sounds.

As remarked elsewhere, it is also a rare example of a live recording that might be better than the original.

9. Dieterich & Barnes – The coral casino (LM Duplication)
A brilliant, slightly delirious album full of genius twists and turns from John Dieterich of Deerhoof and Jeremy Barnes of Neutral Milk Hotel, A Hawk & A Hacksaw and others.

Improvisation is the order of the day across 11 instrumental tunes which veer somewhere between the poles of Tortoise and Can.

11. Kaitlyn Aurelia Smith – Arthropoda (from the album EARS, Western Vinyl)
Genuinely transformative and inspiring electronic creations from another album put together using the whooshes and chugs of the magical Buchla Music Easel.

12. Nathan Bowles – Chiaroscuro (Paradise of Bachelors)
An absorbing intriguing puzzle, a phasing solo piano piece in an album of Appalachian banjo tunes (Whole and cloven), but a miniature minimalist beauty.

Track 8 in this playlist


13. Lambchop – FLOTUS (City Slang/Merge)
A triumph of an album that manages to do the unthinkable – rescue from absurdity the use of autotune on vocals – while pushing into progressive electronic territory, still maintaining a glorious thread from the country/soul DNA of the band.

14. William Tyler – Gone clear (Merge)
And one from the extended Lambchop family. Sublime, wistful, stoic American folk and country instrumentals informed by (back) road trips around the US with an appropriate motorik pulse and ambient hum at work.

15. Qluster – Glasperlenspiel (Bureau B)
A beautiful drifting kosmische tune from the album Echtzeitand worthy of sitting alongside earlier classic material of both Cluster and Harmonia.

18. Marielle V Jakobsons – Star core (Thrill Jockey)
Taking the pace down a notch. Long extended drones from the woman you may know from the band Date Palms.

Find yourself in it.