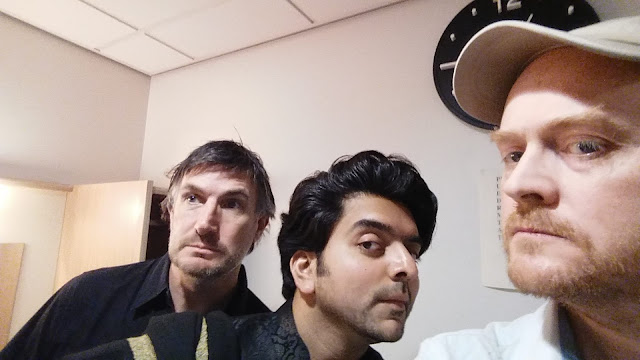 Standing room only in the back of Coughlan’s Thursday.

A joyous occasion even if plenty of sorrowful songs.

Some things that happened.

The furious blues conjured with an acoustic guitar a double bass and a sarangi.

The sarangi a blur of fingers and a keening yearning tone to it you sometimes get from a steel guitar or some other times from a fiddle.

Suhail’s feet tucked under him with the sarangi in his lap perched on a table covered with a rug.

James’ cheeky way with a wisecrack. (“Thanks to Christy Moore for playing support earlier. And Paul Brady.”)

Jon’s laconic way with a wisecrack. (“Remember when The Beatles were so high that they let Ringo sing” as he took the guitar off James to sing.)

Jon’s stand up routine. “I first met Suhail on the set of a Star Trek movie. The Wrath of Khan.”

Suhail’s hand motions in the air while he sang pulling acrobatics out of the notes.

Extra bonus points for James’ intro to ‘Little black buzzer’. He explained how he grew up in rural Scotland. Their family was strictly Catholic and no music was allowed in the house. James and his brother used to tune into American Armed Forces radio to hear the American football scores. One night by accident James stumbled across John Peel and went on to discover bands like The Stupids. Stump. The Wedding Present. “And the man who wrote this song. Ivor Cutler.”

Jon’s intensity and absorption in his instrument blowing away any thoughts of world weary.

Suhail’s voice which mirrored the sarangi as if they were twins made out of the same thing.

Suhail’s voice which was possibly the most impressive instrument on show. A swooping soaring thing. An intimate ambient thing. A lightning percussive thing.

The bag of resin (maybe?) in front of Suhail where he dipped his left hand fingers to coat them for protection against the strings. The wonderful sight of a nyckelharpa (was it?) - some bowing strings above, some resonating strings below.

Suhail’s song introductions which were miniature memoirs of music passed down orally from his grandfather in a house full of music in New Delhi.

The way that these British and Indian folk structures sit so easily together.

James’ words of praise for their label Domino Records.

Unfortunately there was no ‘Chori chori’ from the 2nd album but you can’t have everything.