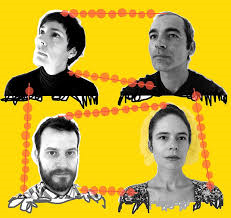 It’s hard to pick out any one element but I must say the vocals are a particular joy.

Not just the lead which is as clear and pure as the best Stereolab.

But the inspired backing ba da das which drive the playout.

Still sounds fresh as a daisy almost a year after release.

Michael Nau – I root (Full Time Hobby)
Sublime hazy memories of love from Maryland in the US...

... as if Harry Nilsson turned his mind to happier fuzzier times.

There’s very little detail to list here – a one and a half note guitar figure, a snare roll, a ride cymbal, a dream of a voice – but really the story is more to do with the atmosphere.

Languid is a word.

Whichever one you like it is at arms length from the cold hard world.

The Saxophones – If you’re on the water (Full Time Hobby)
A dreamy half there thing of beauty from the American west coast.

There’s a fragile atmosphere. An air of late night fretfulness. And the bare bones arrangement contributes fully to that feeling.

That the lyric refers to dangers or unseen risks – if you’re on the water better beware – only adds to the sense of something precious and intimate.

Caroline Says – My fiancé’s pets (from the album 50,000,000 Elvis fans can’t be wrong, Western Vinyl)
Cut from a similar cloth is this cut from Caroline Sallee of Austin Texas.

The album as a whole comes on intriguingly like MBV played with acoustic guitars.

This tune though is a beautiful samba shuffle with the kind of looped guitar strums and riffs that you find yourself noticing only on the third play but which then go on to dominate your thoughts.

The vocal is also dream so let's call it enigmatic dream pop.

This from the label blurb is good –

The autumnal sound of Britain at the turn of the 70s, looking out through wet window panes to a new decade with a mixture of melancholy and optimism for what might come next. With the Beatles gone and the pound sinking, a new and distinctive sound emerges, led by flutes and mellotrons.

And a wordless female vocal that might have taken the ear of Morricone.

The definition of progressive.

Kamasi Washington – Truth (from the Harmony of difference EP, Young Turks)
There’s a wonderful freewheeling atmosphere to this epic music from the Los Angelean composer and bandleader...

...using the great and simple effect of massed voices without harmonies and in unison belting out a rousing melody and reaching a thrilling crescendo by the end.

The beauty of one riff and letting it breathe to the full.

The orchestral majesty of the interlocking undertones and overtones.

Not even the unexpected appearance of some Santana style guitar flourishes late on can ruin the mood.

Inspirational is a word.

...as if John Fogerty was stepping out with The Byrds.

But cosmic in that harmony drift.

Glorious and uplifting pop music to coin a phrase.

Snapped Ankles – Jonny Guitar calling Gosta Berlin (Leaf)
One of a developing and fascinating strand on The Leaf Label.

A prime example that great music can be made of simple elements.

The Comet Is Coming – March of the rising sun (Leaf)
Another welcome blast last year of space funk with saxophones from this robust English crew.

... space funk with saxophones...say no more.

Manu Louis – Tchouang-Tseu was at the Kermesse of M. Ha (from the album Kermesse Machine, Igloo Records)
Unhinged dance music is always welcome around here.

This uncateogrisable beauty comes from Brussels of all places and is filthy and infectious in equal measure.

Four to the floor on one level.

Fuzzy techno synth action on another.

Wonky pop on some level.

Funky as hell on all levels.

Andromeda Mega Express Orchestra – Vula (Alien Transistor)
There’s a welcome strain of mad bastard floating around a certain brand of German music lately and a good portion of it seems to emanate from the Alien Transistor label.

AMEO are an 18 piece ensemble lead by Daniel Glatzel based in Berlin and this music could really make you want to move there.

It arrives gently, with shimmering lights, soft winds, sashaying melodies, and of course, the isotherms and isotheres function just as they should: All of a sudden, lighting strikes amid the concord of instruments, unforeseen energies erupt and upset the rhythmic scenery with elemental force. Making a combined effort to create sheltering patches of harmony within the unfolding drama, leader Daniel Glatzel and his 18-piece “working band” set out to harness album #4...imagine Michel Legrand meeting Maurice Ravel at a Gil Evans gig.

To that I would also add the lightness and sparkle of one of Joe Hisaishi’s Studio Ghibli soundtracks.

And the joyousness frivolity and elegance of Esquivel.

It’s an absolute joy from start to finish and you need it in your life.

The Bonk – The Bonk seems to be a verb (thirty three 45)
Things you should know.

More than the sum of its parts.

*Plus played live this material is distinctly rock and roll. Dirty filthy danceable all of that.

Mick Harvey & Andrea Schroeder – Ich liebe dich...Ich dich auch nicht (from the album Intoxicated women, Mute)
It’s a bold move taking on a nailed on classic (‘Je t’aime’ in case your German is lacking) but the material is in sufficiently experienced and sympathetic hands it makes it an inspired choice.

‘Ich liebe dich (Ich dich auch nicht)’ ranks as one of the all time great Gainsbourg versions with the lead female part taken by the German singer Andrea Schroeder. And I have to say she trumps Jane Birkin in the plausibility stakes with a delivery full of sumptuous exhalations which tail off exquisitely. Plus those back of the throat German “ch” consonants are especially effective. Or maybe it’s just that she’s an older woman than Birkin was so her breath seems to carry more meaning. More weight. The effect is not so much sexual as existential (existential can also be sexy let's face it) and it’s moving to the core.

Plus Mick Harvey’s arrangement - although it retains the iconic organ guitar stabs and swooning strings - emphasises the elements differently. In particular the dizzying 2 note up and down figure on the strings is much more to the fore than on the original. This works brilliantly laying out the headrushing disorientating quality of the song from the very start.

That’s the kind of set up liable to put some people off.

But this project involving Rick Alverson and Emilie Rex has many great things.

Textures to hang your hat on.

A sense of yearning and adventure. (Are they the same thing?)

A certain kind of classic 60s folk music is clearly an influence although fed through a surrealist filter.

The citing of Alejandro Jodorowsky’s film Holy Mountain in the song of the same name is a clue to where they’re coming from.

In 'Come and see' a finger strummed guitar is the main company for the beautiful double tracks of Rex's vocal. One strained high. One soft close up.

String swells make a compelling chamber atmosphere in 'Watch me' like a quiet Bad Seeds moment.

In my favourite 'Her body in the sky' Rex's voice sounds like it will break at any second as a clarinet noodles around a to die for organ hook. A kind of kosmische really. In keeping with the song title.

It is a dream of pop music seen through a cloudy prism of wistfulness and hushed regret.

Which is to say a most beautiful thing.

Two guitar chords and a high hat are the tools employed as Cooper croons somewhere between Chan Marshall and Kurt Cobain.

There’s a wonky slacker feel to the fuzz chords which is particularly endearing.

To add to the sense of intrigue.

There’s a beautiful weave to the synth lines. A carefree quality. A cavort suggesting the tumble of the universe somehow.

But it’s Weaver’s voice that crowns the sound.

Close and persuasive – let’s go outside when it doesn’t feel right / we can disappear – it uses simple elegant phrasing with an endearing down to earth tone which has a hint of world weary about it.

The effect of this simplicity againt the thick swoops of cosmic backing is to make a strange atmosphere. Like the best science fiction it says otherworldly but still recognisable.

The arrangement is a dream of serene space.

The music of Barry Murphy and friends sparkles like the sun while it rumbles with menace.

The new Fluenz EP is another thrilling addition to the catalogue and should be heard in the context of ‘Only the lonely know the glow is failing’ and other such masterpieces.

Look Blue Go Purple – Circumspect Penelope (Flying Nun)
In a way this is the sound of the past. The mid 1980s. Flying Nun Records. A hazy but thrilling jangle. A band of women. Insouciance. Nostalgia can be beautiful.

But another way of looking at it (or listening to it) is that this is the sound of now. Psychedelic pop with gauzy back of the room harmonies. Without this the likes of Warpaint wouldn’t exist. In the 80s they operated in a parallel world to The Pixies. One where they used flutes. A more democratic one, maybe.

The yang to the yin of The Chills. That fed into all kinds of what was known as indie.

A wonderful uncaring looseness. They also call it unselfconscious. With some hard to pinpoint connection in sound to The Go Betweens.

A glorious thing to sustain you in hard times.

Percolator – Crab supernova (Penske Recordings)
Delicious mixture of the propulsion of Stereolab and the textures and crunch of My Bloody Valentine from this Dublin band’s debut album.

With the key element of restraint. Sticking with ideas as worthy in themselves. Letting songs unfurl at their own pace.