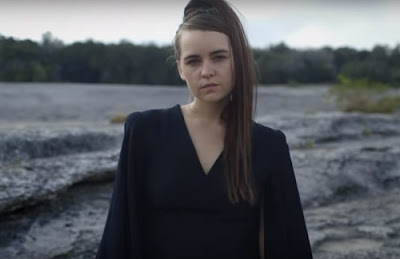 Bedouine – Back to you (from the album Bedouine, Spacebomb)
Another wonderful nugget recorded at Matthew E. White’s Spacebomb hub in Richmond Virginia.

The origin though is the voice and songs of Azniv Korkejian born in Syria to Armenian parents but resident in the US for some years.

Her voice is an intoxicating thing. Hushed. Softly spoken. Insistent. Containing something of a Carole King about it. Or even a Karen Carpenter maybe. Another time anyway.

When there was strength in subtlety and soul was in the nuance as much as the decibels.

And the dream of an arrangement behind the perfect match.

A genius falsetto backing vocal that catches me every time.

She also has a way with a lyric Ms Korkejian.

The great news is the central presence of Lonna Kelley who is becoming a regular collaborator of Gelb’s.

Her persuasive voice mercifully free of vibrato is a wonderful foil to Gelb’s insinuating melodies.

The two new songs ‘Presumptuous’ and ‘All you need to know’ are both worthy additions to Gelb’s epic canon of work and to the body of the classic American songbook.

There’s a wonderful weight to this music.

Could be the weight of longing.

But the air is thick with it.

It is Jonathan Meiburg of Shearwater with Emily Cross and Dan Duszynski of Cross Record.

It is the kind of song that could haunt your waking hours.

Camille – Fontaine de lait (Because Music)
A marvellous tune with a great fluttering quality thanks to cut up sounding clarinets.

The second half is dominated by a female choral section somewhere between medieval and showtunes (a sombre showtune let’s say) not far off a capella and holding longer notes with interlaced aws and ohs.

It does fade out with unaccompanied voices on more clipped (and highly inventive) delivery and the effect is the most chilling/comforting thing.

Knowing that the song is about woman as nurturer (fountain of milk) adds another level of fabulous intrigue to the whole shebang.

John Hynes – Caroline, I’m yours (self released)
An outstanding piece of songwriting and singing from this Kildare singer.

A nylon stringed guitar. A spare stalking bassline. A pleasingly slow shuffle. A torch song. A ballad,. A love letter soaring and straining.

It comes on reasonably traditional on the face of it...and yet there are barbs.

It takes a poet to be wrong about you

Enough to tease and make you doubt and force you to listen again.

There’s a hint of the glorious melodrama of Father John Misty the dark depths of Harry Nilsson and the earnest earned chops of Dublin singer Anderson.

All held together by Hynes’ persuasive croon.

There’s even a keychange and banks of backing vocal oohs.

An unsettling wrongfooting piece of songwriting.

you could have been born someone else

What a brilliantly double edged ocean of possibility.

Animals That Swim – How to make a chandelier (from the album Workshy, One Little Indian)
A bracing cut from the heady days of 1994 remastered and reissued last year and sounding arguably miles more relevant than in those pre-Blair times.

There’s a certain post punk feel, some kind of bearing, authority, swagger. Not just in Hank Starrs’ deadpan but somehow not lacking pathos semi-spoken vocal (something in it would remind you of Stewart Lee somehow). But in the genius guitar riffs. Two of them. Non-identical twins. The first a seemingly friendly Britpop wolf in sheep’s clothing. The second consisting of mostly the same notes but with a bend and a twist and a smear of rock n roll danger about it.

In the space of only two minutes there’s also room for a pummelling breakdown and a blaring trumpet crescendo.

And all the way through the existential lyric the epitome of lying in the gutter but looking at the stars - trying to make a chandelier from the glass of car windows broken by his own hand but only succeeding in cutting himself.

Thrilling rock n roll but more than that too. Earthy. Poignant. Beautiful.

This is the Kit – Moonshine freeze (Rough Trade)
A perfectly wonderful twinkling folk boogie from Ms Stables and friends.

Things that are good.

The circling guitar pattern is adorned with a Buffalo Springfield-esque guitar shimmer.

The lovely shuffle groove is capped off by the most amenable horn section heard in some time.

It seems so simple until you realise that it isn’t.

It doesn’t matter whether it’s simple or not.

The beguiling melody hits the spot.

It is a beautiful thing.

PINS feat. Iggy Pop – Aggrophobe (Haus of PINS)
A song that falls into the category of undeniable.

The definition of stalking and of course the presence of Mr Osterberg contributes handsomely to this.

Let’s also highlight the wonderful restrained arrangement which threatens to unleash at any second but remains coiled with the shimmer of menace.

School Damage – No ideas (Chapter Music)
No ideas left and no need to overthink the winning no wave pop instinctive genius of this opening tune from the Melbourne band’s debut album.

St Vincent – New York (Loma Vista/Caroline)
For me this song nods back to Annie Clarke’s first album a little when the music was as baroque and intriguing as her choice of moniker.

One of the year's anthems beyond doubt.

Terry – Glory (Upset The Rhythm)
I don’t need much encouragement to get worked up about Australian bands but even so I like this crowd a lot.

Melbourne seems to be quite the hotbed this weather from where this four piece fashion what they’re calling dolewave.

I’m not sure it’ll catch on as a genre tag but the music has a charm and swagger to it that’s very appealing and the word slacker might not be out of place.

The beautiful judicious use of a fuzzbox.

Another Australian band who manage to make pop poetry out of simple slash unpromising materials.

The Stevens – Good (Chapter Music)
The spirit of GBV and Pavement is alive and well on this Melbourne 4-piece’s excellent second album.

Satisfying not as simple as they sound guitars make hay with the most satisfting go ahead drumming.

In general the feel is of the joy of the bandroom.

But let’s also point out the superior songwriting and nagging tunes at the heart of gems like ‘Chancer’ and ‘Cruiser’.

Produced by MJ from Hookworms.

And especially this coup de grace –

Meanwhile the guitars and drums keep a stoic presence in a Silver Jewish kind of way.

It's soulful in the way white people can sometimes be.

Chloe March – Orchardie (from the album Blood-red spark, Hidden Shoal/Powderkeg Records)
The latest album by Chloe March is another heady trip through electro pop but really that tag doesn't do justice to the range of expression.

The air is thick with atmosphere throughout and March is a masterful creator of mood.

This is just one of the stunning rarefied synth compositions topped with layers of her remarkable voice.

I particularly love the dappled pulse of electric piano when the pace picks up for the chorus.

It is also a beautiful sound somewhere between The Blue Nile and David Sylvian and as that would suggest very soulful.

Goldfrapp – Anymore (Mute)
A great tune of filthy glam electro proportions harking back to their golden age (for me) of ‘Ooh la la’ and others.

You need a banger in any playlist.

The Magnetic Fields – ’69: Judy Garland (Nonesuch)
This deserves a place in the best music of last year for this opening line alone –

The brilliance of that lyric should not deflect from the enduring quality of the tune and arrangement.

Plus both 'Je t’aime' and '69 Année Érotique' by Serge Gainsbourg are namechecked.

Montero – Vibrations (Chapter Music)
Meet Ben Montero of Melbourne who is currently shacking up in Athens and by all appearances (from the music video anyway) having a whale of a time on the Mediterranean.

This storming tune has shades of Connan Mockasin and Tame Impala although imagined through MOR/soft rock rather than filthy funk or psych rock.

A quick perusal of his Facebook confirms the suspicion that this is the music of someone quite happy to proclaim love for the likes of Fleetwood Mac and REO Speedwagon.

Which in itself is to be applauded.

There’s also the small matter of a song which begins with a chorus especially one as good as this.

A lost art in pop music.

The sound of genius in the making I feel.

And a lovely warped feel to the prismatic guitar.

The voice is a wonderful instrument twisting words out of the side of the mouth making intriguing inflections.

With the blues wrapping around and a hint of the swagger of early Bowie.

It’s a great thing when pop music can be understated and dramatic at the same time.

These consist of the sweet but aching voice of Caroline Landahl.

It’s all great but the rhythm section is a particular joy. High flying bass notes and a gorgeous drum sound.

Drift away on that.

The Clientele – Everyone you meet (from the album Music for the age of miracles, Tapete)
Sometimes a plainly gorgeous piece of music is enough.

Other times the softly muted fanfare of brass like the beloved sound of Eric Matthews can make all the difference.

No sense of Mr Matthews’ baroque flourishes here though. More akin to some of The Byrds’ subtler experiments. Around the Younger than yesterday album when David Crosby especially struck out on a tantalising dreamy limb before heading off into the sunset.

There’s a distinct domestic feel. An idyll. As Alisdair MacLean details a daily routine around Silver Street and singing strings buoy up every word.

It amounts to a kind of soaring chamber pop as poignant as it is uplifting.

Which is to say making the glorious lovelorn jangle.

However there are some combinations of elements that even on paper are close to guaranteed to bring about wonderful results.

A chorus of oohs.

Add to that the way around a melody and bouncing backbeats which are two of the things we love most about The Go! Team.

And the sheer exuberance of the group of Detroit teenagers who guested on vocals.

Did I mention that the singers introduce themslves along with their starsigns during the breakdown?

(Plus is that a theremin in the background?)

A joyous riot and a genius pop song.

We like progressive tendencies around here and a part of this is a heady brand of progressive pop.

It comes on like Todd Rundgren arranged by Curtis Mayfield, with top notes of swooning strings and the middle ground full of wonderful staccato brass.

Apparently a 40-piece orchestra was involved on the album - arranged by Matthew E. White no less - and this song shows every sign of that (why bother says you if there wasn’t going to be every sign of it).

Not to get bogged down in politics but this kind of vaguely unhinged and entirely distracting pop belter could be THE most effective political response in these times. Know what I’m sayin?

Weyes Blood – Do you need my love (Mexican Summer)
Her landmark album Front row seat to Earth was at the top of the 2016 list but this song was released in radio format last year.

Plus Nathalie Mering played one of my shows of the year. A heady mixture of absolute star presence and hummable tunes.

Of which of course this is one. It still makes me think of Karen Carpenter. That’ll be the elegance of the vocal melody and delivery says you in among the plot and intrigue of the song’s psychodrama.

Future Islands – Beauty of the road (4AD)
For the gig on July 4th last at Cork Opera House (footage of that show features in the video below).

For the sweat soaked shirt by the end of the first song.

For the tunes for the heart for the soul.