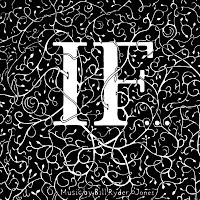 It's been a good month for Double 6. The ex-Coral guitarist’s debut album is an imagined soundtrack for the Italo Calvino novel If on a winter’s night a traveller. I’m a pushover when it comes to soundtracks (isn’t all music a soundtrack for something?), but even so this is still a beautiful album with lots of shading and texture, aswell as an emotional punch. The considerable talents of the Liverpool Philharmonic Orchestra are employed throughout for many memorable and sweeping, cinematic moments (the majestic Enlace, in particular, has a series of wonderful brass smears), but for my money the vocal pieces have the most impact. The plaintiff Leaning (Star of Sweden) has an air of Gorky’s Zygotic Mynci to it; By the Church of Apollonia sets a wordless, female keen brilliantly against a military tom beat, which manages to suggest Ennio Morricone without sounding anything like him as such; the miniature guitar picking and intimate/lost vocal of Le Grand Désordre are striking enough, even before a stoic cello wraps the whole thing in ointment; and the stunning Give me a name has a hushed quality, wonderfully underlined by swathes of orchestral deep end. The whole album is laced together with delicate, restrained piano figures.

To record a soundtrack to someone else’s book is a brave move in itself. The story goes that Ryder-Jones is uncertain of his future plans, to the point of being unsure if he’ll even record again. Somehow that makes me like this album even more, the fact that it’s not a stepping stone towards something else. Purely for the love of it. And it’s intended to stand or fall on its own merits. There’s no doubt it stands. It’s a fascinating piece of work and it hopefully won’t be the last we hear of BRJ.