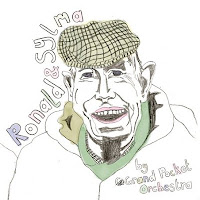 I missed Grand Pocket Orchestra’s first album, The Ice Cream, so this is my first sustained exposure to a band I’ve heard good things about. Therefore, in this review I’ll be confining myself to talking about their second album. So what we have here is…

…A set of sublime teenage symphonies, sounding like they were put together in a garage, mixed with a barrage of pleasing no wave elements (you would think Daniel Johnston is a strong influence) and bursting at the seams with pop hooks. The songs deal with everyday, mundane topics, basically the important things in life – the joys of coffee (Coffee cup), weekends away under the stars (Camping) and a desire to try new sexual positions (Pinkywolf).

On first listen, I couldn’t get enough of the gorgeous Sulphurous stain, which counterpoints a low electric guitar growl with light and carefree glockenspiel. And the way that Five pairs of fingers superbly marshals a series of bittersweet melodies, somewhat in the manner of Rollerskate Skinny, while still allowing room for a toytown orchestra. Later I was seduced by the positively glorious Andy has the power of a million men, which is surely unique in this world in featuring a recorder among wall of sound guitars.

Around the mid-point, Looking glass is like a Dirty Projectors outtake, a beguiling fairy tale guitar lullaby falling over itself. Association Press Dinner’s single, satisfying power chord shows heavy metal leanings – the entry of tin whistle tends to take that metal edge off. And there’s the campfire harmonica and massed vocal of Pictureless boots, a kind of no wave update of Wandrin’ Star. The glockenspiel makes another appearance at the end, providing twinkly, ingenious contrast to the jumpy bass hook on the utterly infectious Sandra.

This genre-hopping might come across as cursory in less capable hands. But holding everything together, centrestage, is the quixotic voice of Paddy Hanna, who sounds like he could take on RnB, avant garde installation accompaniment or whatever the fuck takes his fancy, and have enough left for some Arcade Fire stadium anthems in his spare time (they wouldn’t be political anthems though, and something tells me he’d be doing more crowd surfing than Win Butler). I love the sun-kissed guitars, which are everpresent, riding some wonderfully resolute drumming, with great melodic bass work. And I love the fact that the songs never talk down to the subject matter (or the audience), camping or putting custard on ice cream being treated with the same seriousness and conviction that most bands reserve for falling in love.

What’s more, while throwing the kitchen sink at an arrangement in seeming ramshackle fashion, GPO are not afraid to go for the jugular with a three chord trick. And I must say, I’m a sucker for a band who can mix ideas with irresistible pop tunes.

Suffused with a joyous, freewheeling, childlike energy, a lust for life (complete with buttery knives, stains on your clothes and superheroes) and, just as importantly, pop music, this is an album that’s impossible not to love. A triumph.