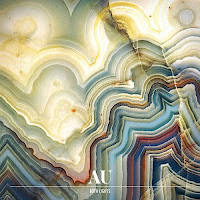 The eagle-eyed among you may have noticed that I've been playing a lot of AU lately on the show. That's because their new album Both lights (on The Leaf Label) is inspiring stuff (my review of the album here). They've just announced an animated video for one of my favourite tracks on the album, OJ (first song on this week's show), made by Japanese film maker Takafumi Tsuhiya. It shows off a pulsing, liquid use of colour, which interacts very successfully with the song's machine funk. Check it out. They've also made the song available for free through their soundcloud page. I recommend you avail yourself right away.
AU Takafumi Tsuhiya The Leaf Label Videos