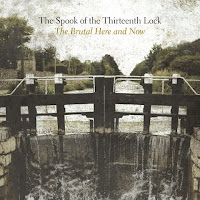 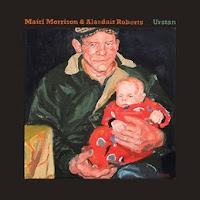 Two fine folk albums have been occupying my mind, and ears, a lot in the last month or so. They are The brutal here and now by Dublin band The Spook of the Thirteenth Lock, and Urstan by Scotland's Mairi Morrison & Alidair Roberts.
They're actually very different musically, despite sharing the (very broad) folk tag. Here's a link to a review I wrote of The brutal here and now for We Are Noise -

The Spook use various rock structures but incorporate many themes and patterns from folk music, and not just Irish folk or traditional music. The outstanding tune on the album, and one I've had trouble getting out of my head for several weeks, is actually sung in Italian - The Tarantella. From that review -

The first song, ‘The Tarantella’, is sung in Italian, although its ominous drone opening and building mid-section make me think of Mogwai at their most steadfast, while its blistering finish is up there with the wildest hooley The Pogues ever managed (check in particular the rousing machine-gun refrain, “piú rapidita”). It’s an intoxicating fusion of folk styles – including the eponymous Italian folk style – and so intriguing that for some time I found it difficult to get past.

I think the band also credit Indian drone music as an influence on it too. It's such a powerful piece of music that it has the effect of overshadowing the rest of the album in a way (especially as it's the first song). And that Mogwai feeling carries through much of the album, with many prog and psych rock references. It's great stuff and you don't have to be into trad or folk to dig it.

Speaking of Glasgow, Urstan is an album conceived and made in that city. It's a collaboration between playwright, actress and singer Mairi Morrison and singer-songwriter Alisdair Roberts. They met at the monthly Ceol 's Craic club in Glasgow's Centre for Contemporary Arts - which celebrates Scots Gaelic language and culture - and first performed at the club, along with fiddler Alastair Caplin, in 2009. It went so well that they decided to commit some of their ideas to record (at the invitation of the club), namely to explore differences and shared elements between Lowland Scots and Gaelic traditions.

This is from the Drag City website, who released the album (one of the most consistently entertaining label sites by the way) -

Gaelic and Scottish tales told once upon a time and told today as well, but not just bards and storytellers, but by people - Gaelic-speaking citizens of the world in general and Scotland specifically. Speaking and singing for them here are Isle of Lewis native Mairi Morrison and lowland favorite Alasdair Roberts, aided by a slew of Glasgow luminaries, two original tunes from Roberts and Morrison, and the devotion of Ceol's Craic. Understand? Urstan!

Right on. Here's a performance of the last track on the album, Leanabh an Oir, from Rough Trade East in London last month, with Caplin joining on fiddle.

That gives you a good sense of music rooted in tradition, although my favourite moments on the album are where the brass, in particular, arrangements steer the listener away into other realms - threads of jazz, rock and even brass band music, to my ears. Here are the main actors speaking about the background to the recording of the album and the songs involved.

One of the things I enjoy most about the album is that it answers the question, "what's this music for?". The answer is contained in the superbly detailed sleevenotes - worksongs, laments, lullabies, lovesongs, ballads, stories of commemoration and derring-do. All human life, in other words and all in the service of making the time pass more pleasantly. Balm for the soul.
Drag City Mairi Morrison and Alisdair Roberts The Spook of the Thirteenth Lock Transduction Records