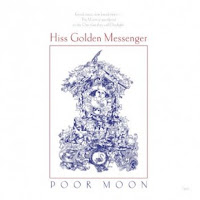 Some new music came our way today and we thought we’d do a little sharing.

Because it’s particularly beautiful, but also because the band in question plays in Cork on May 3rd (Triskel Christchurch, also Whelan’s in Dublin on Apr 30th) (Note: The Cork gig was subsequently, and unfortuately, cancelled.). The music in question is by Hiss Golden Messenger, lead by Mike Taylor, the album Poor moon. Here’s the biog, courtesy of the record label, Tompkins Square.

Hiss Golden Messenger is Durham, North Carolina-based songwriter M.C. Taylor, in partnership with multi-instrumentalist and recordist Scott Hirsch, who lives in Brooklyn, New York. The pair have been playing music together for nearly two decades. Poor Moon is the fourth proper Hiss Golden Messenger release, and serves as the best summation thus far of Taylor’s lone journeys through the dark night of the soul. “God is good, and it’s understood,” he sings. “But he moves in mysterious ways.”

Taylor and Hirsch are clear that they draw inspiration from a variety of sources, including the blue-collar mysticism of Ronnie Lane and Richard & Linda Thompson; the high haunted atmospheres of John Martyn and Talk Talk; and American vernacular music writ large (from Archie Brownlee to the Staple Singers; Charlie Poole to Merle Haggard). Yet for all that, Poor Moon is a singular vision, one that only two companions could have made after twenty years of music-making, revelry, and repent. Poor Moon sounds like nothing so much as Hiss Golden Messenger.

Taylor and Hirsch are joined on Poor Moon by regular collaborators Terry Lonergan, Nathan Bowles (Black Twig Pickers; Pelt); Hans Chew (D. Charles Speer & the Helix); Matt Cunitz (Brightblack Morning Light); Tom Heyman (The Court & Spark); visual artist Alex Jako and others. The result is a lush yet concise album, recorded in one week, that has been championed (unsolicited, we might add) with effusive praise in Interview Magazine, UNCUT, The Guardian, and NPR.

Some very interesting names in there.

The music, well our first thought was of a slightly peppier Lambchop, in its country-soul stylings (including some sumptuous brass). Not surprisingly The Band would also come to mind (on the subject, RIP Levon Helm). You might even say, a rootsier version of Sparklehorse, if you were looking for contemporary reference points.

Mainly, it’s Taylor’s dreamy vocals that we’re getting off on now. A drawl that’s something short of a slur, something beautiful, a voice you might wish to sit and listen to for some considerable time. So, enjoy.

I also did a Q&A with Mike Taylor for WeAreNoise, check that here - http://wearenoise.com/index.php/2012/04/hiss-golden-messenger-qa/