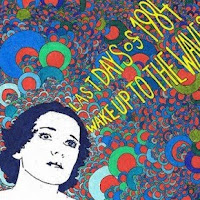 Very fine Irish albums don't come along all that often (although more often these days, perhaps because there simply are more of them released), so I tend to sit up and take notice when one as conceptually coherent, brilliantly produced and downright catchy as Wake up to the waves comes along. Here's a review I wrote of the album for Cork zine WeAreNoise, original link http://wearenoise.com/index.php/2012/05/last-days-of-1984-wake-up-to-the-waves-osaka/.

You could make comparisons with the percussive offbeats of Tanlines, the euphoric tropicalia of El Guincho, or, at a push, Animal Collective (the latter particularly in the beautifully treated back-of-the-room harmonies). The beaches of Ibiza are never far from the mind on this album, but it’s nothing like a one-dimensional piece of work. Afro-pop guitar flurries wind around the insistent backbeats and there’s also a strong, and very pleasing, hint of shoegaze leanings throughout.

You’ve probably already heard lead track River’s edge, with its lovely warped, prismatic synth lines. Add to that the gorgeous instrumental wash of Kismet; the beautiful percussion work on Wavelife; and the great irrepressible quality of Season, my own personal favourite, with its air of a rave at the break of dawn.

It wouls also be wrong not to mention the closing track Woods, which has the most beautiful fuzzy breakdown before it cascades off into the distance on a refrain of “watch the sun go down” – it’s a fantastic tune liable to be ringing around your head long after you’ve cleaned the sand out from between your toes.

Over the album's total 42 minutes there are just seven tracks, meaning that plenty of time is allowed for individual ideas to breathe and unfurl. I like a band not in a hurry. All the better to imagine that Mediterranean glow in the depths of an Irish winter/summer.

I must say too it’s refreshing to hear an Irish (alternative) band make unremittingly upbeat and uplifting music. And good to see a sense of adventure, global curiosity, crossing of genres, fusing of influences (the breadth of the band’s horizons was made clear by the recent Tour Diary they did for us – http://wearenoise.com/index.php/2012/04/last-days-of-1984-european-tour-diary-marchapril-2012/.

The label is relevant in this. Osaka has built a strong reputation over the last few years for bridging dance and indie, underground and mainstream, through impressive releases by the likes of Thread Pulls, Patrick Kelleher, Hunter-Gatherer and The Last Sound.

This album sits very well in that company – in fact, in any company. It’s guaranteed to make you feel good about being alive. In short, this is glorious pop music.