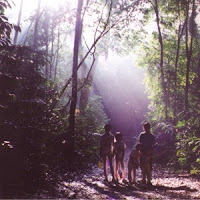 Another really fine Irish album just out is by Dublin band Halves. Boa Howl is their second studio album and you could say it's an orchestral pop collection, although the hooks are deliciously subtle and underplayed. And the production is a beautiful re-creation on tape of a vintage recording - that's one way of reading it anyway - although with distinctly modern updates. There's something admirable too about the fact that the band specifically sought out the Svenska Grammofon Studio in Gothenberg on the basis of its possession of a Neve desk.

I reviewed the album for WeAreNoise, original link here.

This is the second studio album from Halves (in between they also produced a live album recorded at The Unitarian Church in Dublin) and for it they decamped to Svenska Grammofon Studios in Gothenberg in order to avail of the facilties there, most notably the famed Neve desk. The resulting recordings are sublime, a suspended otherworld of sound which is an enticing combination of the exotic and the familiar.

Before getting to the material itself, among the influences listed in the press material – The Flamingos, Joe Meek, Clouddead, traditional Malian music – one name struck me in particular, Gordon Jenkins. According to Wikipedia, “Jenkins worked with the Andrews Sisters, Johnny Cash, The Weavers, Frank Sinatra, Louis Armstrong, Judy Garland, Nat King Cole, Billie Holiday, and Ella Fitzgerald, among others.” Jenkins was a songwriter and orchestral arranger active in the 1950s and 60s. With a list of credits like that, he seems like one of those Zelig-like characters who have infiltrated pop music anonymously, whose work you know but whose name you don’t (Van Dyke Parks might be another example). And the epitome of classic pop music at that. (Check the interview with Brian Cash from the band to read more about this research strand.)

I bring this up because it struck me a few listens into this album that the string arrangements are lush but also distinctly unsettling. On ‘White Boa Howl’, for example, a sense of cinematic and brooding melodrama is brought to bear on a kind of awestruck narrative. Elsewhere, ‘Polynia’ and ‘Drip pools’ both share the kind of stretched, fractured atmospherics that are a trademark of CocoRosie.

And really, this record is all about atmosphere. Clearly, the desk and other vintage equipment have allowed the band a full, widescreen palette in order to evoke an amazing array of nuanced and detailed song scenarios.

A little of Grizzly Bear’s surreal pop shapes was hinted at on lead track ‘Drumhunter’ – that impression gains traction here and there on the album via wispy vocal melodies and the swooning arrangements. Although those elements are employed to wonderful effect on ‘Tanager Peak’, which features Gemma Hayes on guest vocals, the band quickly depart from any thoughts of a hipster template.

‘Hug the blood’, in particular, is a song that snagged me good around the middle of the album. It has an air of that brand of spare Northern European jazz that you might associate with the ECM label - twinkling cymbals and bass chord strums set against a vocal lament backed with the most gorgeous gamelan-like melodic percussion. As if that wasn’t beautiful enough, a heartfelt horn section joins for added emotional heft, before the second movement introduces an incongruous heavy metal structure, taking hold complete with power chords and pounding drums. Incongruous maybe but it all makes perfect sense and flows seamlessly.

The overall tone of the album is a shade of delicate but without ever any danger of being twee, thanks mainly to an intriguing percussive bed ranging from pitter patter brushed snares to full kit break beats and electronic glitch constructions to orchestral tympani and military styles.

Some of the arrangements would tend to bring a band like Efterklang to mind, being light as air and just as hard to pin down, but I must say I find more warmth here than on that Danish band’s last couple of records. There’s a level of engagement with the material here that makes for a real album type album, if you know what I mean. It really does bear repeated listening and has a satisfying slow burning quality.

I also interviewed Brian Cash from the band over the phone for the show. He had some interesting things to say about the influences the band brought to bear on the album, the songs, arrangements and production.

You can hear the full audio here.

Interview w Brian from Dublin band Halves, whose second album Boa Howl is just out. by Theundergroundofhappiness on Mixcloud

And here's some of the transcript I did for WeAreNoise. Refreshing to hear that I'm not the only person who buys records and lets them sit there for, sometimes, years before listening to them.

Something else on the press release that caught my eye was this quote – “Musically, the album was inspired by a wide range of influences – from The Flamingos and Joe Meek, to Clouddead, to traditional Malian music and the 1950s orchestral arrangements of Gordon Jenkins.” Can you talk me through those in a bit more detail? What is it about those styles that attracted you? That list in particular is a combination of the three of us because the band is essentially three songwriters and three producers. That’s what Halves is, it’s just what happens when we get in a room. My ideas would be very different to what Elis brings and to what Tim would bring. As far as those influences, Gordon Jenkins and Joe Meek would be Elis. Elis would be the one who writes the string and brass parts for the most part and does all of our orchestral arrangements. He was very much influenced by trying to capture those old sounds.

The Flamingos and Clouddead was me. As I was writing the album I was going through a big Clouddead phase. I love their lo-fi sound and how you can hear a lot of their stuff is done on cassette tapedecks. Sounds are put together that don’t have any relevance so that inspired me to write my songs for the album. Production style moreso – obviously I didn’t write weird underground hip-hop. It was that weird tapedeck sound that I was after.

And traditional Malian music, where was that coming from? People might remember Damon Albarn did this Mali music record about 10 years ago. I bought it and never listened to it! It was only about a year ago that I actually put it on and absolutely fell in love with it. From there I started to research other local acts. A lot of that is recorded on the streets in those villages on ethnic stringed instruments. And on the album we used, albeit samples, instruments from further afield.

I think the thing we hate the most is anything that sounds meticulous and polished. We like things being rough around the edges. We get excited by records where you can hear things that are slightly out of tune or slowed down. That Mali music record has a ton of that, it’s kinda like an audio documentary through songwriting.

And I’m no expert on Malian music but from what I have heard – in common with a lot of other African music I suppose – there’s usually a heavy core of percussion involved which definitely seems to come through on your album. Well one thing we consciously made an effort to do on this album was to have things that were more upbeat, the higher end on the bpm, because on the first album there were quite a lot of slow ones. The few times we did sit in a room together and play music, we set up two drumkits, myself and Elis sat down behind the drums and Tim played whatever the idea was and sang it. We really got into the idea of intertwining electronics we’ve used since we started but trying to write proper drum lines to go with what was coming out of the laptop. It was like trying to find the natural meeting point between Ableton and a drummer. We were trying to make things a bit more fluid.
Dublin Halves Interviews