The National at the Marquee in Cork

July 16, 2013
A few weeks ago I had the pleasure of seeing The National again, in my hometown this time. They played in Cork before (see below) but I couldn’t make it to that gig. I did see them at The Olympia in Dublin in 2008 on the back of the Boxer album – that was great – but this time had four or five times that number of people, something not far off 5,000.

Thinking back on it now, it was unusual, as gigs go, because it was almost as much a literary experience as a rock n roll one. It certainly was visceral but the show engaged the intellect at least as much as the melody receptors. Two sides of the brain in play then. That's the way with The National though. At a glance they seem to be a certain kind of band but let them seep in and they're revealed to be several types of band in one.

I reviewed the gig for WeAreNoise, here’s the link with the full text.

All photos below are by the official photographer on the night Miki Barlok, www.barlokphoto.com. Check Miki's full photoset of the gig here, there are some more great shots in that.

And here’s an edited extract from the original review.

And so excitement swept through the place like a virus just before 8.30pm as grainy backstage film of the band appeared on the giant backdrop and the bar duly and swiftly emptied. The band - five core dudes in black plus two added on brass and other assorted duties – took the stage like homecoming heroes, modest but appreciative. Their opening salvo included their homestate pseudo-tribute ‘Bloodbuzz Ohio’, the stirring ‘Sea of love’ and the intriguing ‘I should live in salt’, the opening song from Trouble will find me which still manages to hook the listener despite its should-not-work 9/4 time signature. So much about The National should not work, but it does, repeatedly. 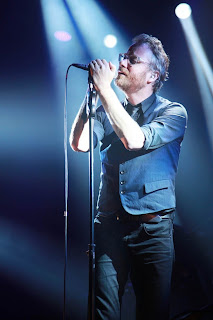 Matt Berninger was soon prowling the stage like a caged lion - his restlessness eventually got the better of him towards the end of the set and he absconded into the front rows, as is his wont, surfing over heads and disappearing out of view, coming up for air again on the other side of the stage with mike in hand, head over the madding crowds. Back on stage he complimented the “guys over there for squeezing my balls, thanks dudes.” As well as being wonderfully wry, he really does have a compelling, dormant volcano presence with a distinctly unpredictable air – although I’m reliably informed he’s a thorough gent, the impression he creates is that he could just as soon deck you as shake your hand.

Of course, he did blow his load on a few occasions, if you’ll pardon the expression, notably on ‘England’ from their breakthrough album High Violet which features the unforgettable chorus

Afraid of the heights 'cause they're desperate to entertain.

That song also gives a hint of Berninger’s writer’s mind at work - I don’t even think to make corrections, again everyone in the room sang along with every syllable - and contains the brilliant light touch of the Dessners’ arranging skills, an inspired recurring brass swell of punctuation. 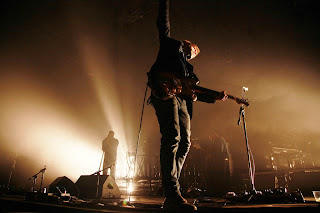 The Dessner twins flanked Berninger sporting twin Jazzmasters to begin, exhorting the audience regularly. At one point Aaron asked how many people present had been at their first Cork show, in Triskel Arts Centre in December 2002 (although 2003 according to him). The crowd demurred – that show after all had an attendance of about 15. Berninger chipped in that only himself and Scott were there, delivered with his impeccable baritone as always. There was also a special word for Dublin venue Whelan’s where they played on their second visit to Ireland (Nov 19 2005).

There were so many memorable moments. ‘Fake Empire’ from 2007’s Boxer, which ranks high up the list of unusual pop anthems – a waltz that’s difficult to dance to but that forces on you a certain jittery feeling. And a lyric that unnervingly calls to mind New York but could in fact be about any of our Western World cities. With a refrain that could be a quote from your favourite novel, a kind of Catcher in the Rye for the 21st century, except this one sung by 5,000 people with their hands in the air.

From Alligator a couple more classic cuts. The absolutely thrilling ‘Abel’, yet another very strange singalong – My mind’s not right – delivered with savage intensity by Berninger, crouching to half his considerable height to spit the words directly into the front row. And ‘Mr November’, a coruscating assessment of American culture and politics.

I used to be carried in the arms of cheerleaders I’m the new blue blood, I’m the great white hope I won’t fuck us over, I’m Mr November

On ‘Conversation 16’, the tent once again needed no encouragement to join in the lusty chorus, I was afraid I’d eat your brains, Cause I’m evil.

The wonderful ‘Graceless’ from the new album, a sober self-reflection which drags itself out of the doldrums by means of another jumpy backbeat and soaring arrangement. Those backbeats of Bryan Devendorf were a consistent feature of the show. In fact, in a live setting the power of the songs was shown to hinge on their itchy, wrongfooting quality, tightly coiled balls of energy only very gradually releasing their payoff. 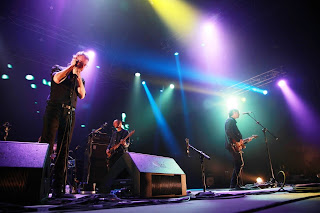 The encores arrived and came to a head with the measured brilliance of ‘Terrible love’, adorned with those soul-haunting “ooooh” backing vocals. That would have done me as a sign-off but they went one better. All seven came front of stage, like actors taking a bow, for an acoustic rendition of ‘Vanderlyle Crybaby Geeks’, another in a long list of the most unlikely anthems ever. Anti-anthems.

The National have been compared to REM and it makes a certain amount of sense. Here is a band who took five albums - High Violet, their last - to find their audience (at least one this size), cross over as the parlance has it. (In REM’s case that album was Document which had the radio-loving ‘It’s the end of the world as we know it’ and ‘The one I love’.) There has been no catapulting to stardom. Even now they are quite clearly reluctant stars (Bryce’s occasional windmills aside) and at that would be barely recognised walking down most high streets. Plus they obviously identify with their audience too, in the sense that they could be those people. Berninger's surfabout can be seen as a genuinely democratic gesture. At the end of the show, Scott Devendorf grabbed Berninger’s laminate, had him sign it with a black marker and handed it with visible satisfaction to one of the diehards in the front row. The bond with the audience really was a thing to behold.

The organic and gradual journey of the band to this point brings the restraint of the music into focus. It’s as if they’ve been pacing themselves so as not to overreach, an albums band making thoughtful music with a slow burning majesty, rock n roll for shy people in a way, you could even say geeks in fact.

So 5,000 people came from all parts to join in the occasion, to sing along for 2 hours with songs that most Irish people have never heard, not to mind heard of. Songs about uncertainty and loneliness, about vanity and fucking up, about being let down by people who made promises, about letting others down. Songs about things most people would rather not talk about. Talk about anti-anthems. It was kinda joyous, all in all, and a pretty strange and wonderful experience.
Cork Marquee The National