Jennifer Castle – Truth is the freshest fruit (from the album Pink city, No Quarter Records) 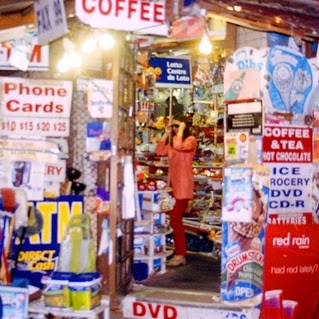 Jennifer Castle is a new name on me but she’s a well-seasoned session musician and vocalist in Canadian - specifically Toronto - circles, as well as having several albums of her own under her belt (this is the second under her own name, previously she used Castlemusic). This wonderful opening tune on her new album has managed to stop me in my tracks every time so far, it’s hard to get past it.

‘Truth is the freshest fruit’ starts out with a ghostly folk tinge but takes on a brighter, more uptempo feel courtesy of a sublimely warm and throbbing string arrangement by Owen Pallett. There’s something about it that reminds me of one of those Bobbie Gentry cautionary swingalongs - maybe a slightly muted version – full of drama and intrigue while remaining brilliantly low-key. And even while sounding like a folk song, there’s a lovely AM radio quality to her voice, a smoothness, a restraint.

Just when you think it can’t get any better, later on there’s a glorious dash of sun-dappled piano, a resigned vocal repeating “born at the end of the year”, joined by swooping strings as if in moral support.

*After finally getting past Track 1, here are a couple of other thoughts on the album. ’Nature’ is another atmospheric, deceptively dense piece. It seems to be a spare piano arrangement but the air is thick with...tape hiss? room ambience? field recording? Whatever it is, there’s something heady and quietly emotional about it. And as for the closing line – “I lift my skirt for the economy” – there hasn’t been a better punchline this year.

**I love ‘Working for the man’ as well, a cousin of a Joni Mitchell melody played on sombre piano chords, with another swoonsome Owen Pallett string section as intro.

***And ‘Sailing away’ is a sprightly country picker with beautiful lilting vocals and yet another killer string arrangement.

'Truth is the freshest fruit' is Track 4 on this show