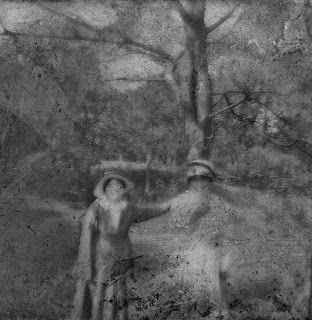 My favourite song from a beautiful album of folk, psych and chamber pop strands, with some baroque and minimalist shapes for good measure, put together by a kind of English underground pop supergroup based around a core of Second Language artists.

This tune is derived from a poem by William Blake and lands gorgeously on the dreamy psych pop end of the scale. Anna Bronsted of Our Broken Garden sings through a haze of clip-clop drum machines, circling Spanish guitar and the most perfect trumpet part in the second half. There’s also whistling involved. The song doesn’t seem to reside fully in either a major or minor key, so there’s a slightly disorientating effect. Plus there’s a strange feeling of something ancient wrapped in something modern. Surrender to the blur anyway, it’s glorious.

The album features the mother of all collaborative efforts, of the like perhaps not seen since Ivo Watts-Russell persuaded the considerable talents of the 4AD roster of the mid 1980s to record as This Mortal Coil. Here’s what the blurb says –

In 2010, the then-fledgling Second Language label invited its artists to assemble in Soup Studios (then beneath the Duke Of Uke ukelele shop) on Hanbury St in Shoreditch, London with a view to recording an album - the only "rules" being that all the music should be improvised from scratch and once an hour had passed, they should move on to the next song.

Within the first 8 hour session, the assembled cast of Katie English (Isnaj Dui), Oliver Cherer (Dollboy), Angèle David-Guillou (Klima), David Sheppard (Ellis Island Sound), Glen Johnson and Jerome Tcherneyan (both of Piano Magic) birthed 8 very rough new sketches. Utilising Soup's wide palette of archaic drum-machines, guitars, keyboards, drums and whatever else was lying around, the Silver Servants (as they quickly tagged themselves; a misheard "Civil Servants" if you must) had fashioned a random, yet, somehow cohesive blend of psych-folk, krautrock, minimalist electronica, baroque and post-rock. (Post-psych baroquetronic folk music, should you be a record store worried about where to file it).

Content with their day's hard labour, the Servants adjourned to the nearest pub and for the next year, the recordings gathered dust. A year later, another session was mooted, yet more layers were added to the existing blueprints and yet more songs were whisked up from the ether. New members appeared : Zizi Kanaan of The Eyes In The Heat, Sharron Kraus, Aine O'Dwyer, Nick Palmer aka Directorsound, Mark and Roxy Fry, Robin Saville (ISAN), Frances Castle (The Hardy Tree) and Nick Franglen (Lemon Jelly), all contributing their individual unique talents to this rich (then still only instrumental) tapestry.

Again, the recordings were left to the dust for another year until finally, lyrics were written, vocals were added and at last, something resembling an album appeared. Cut to 2014 when Oliver Cherer and Glen Johnson finally tweaked and snipped and polished off the 12 recordings that would form 'Silver Servants' by Silver Servants (a late addition being an inspired take on William Blake/Sir Hubert Parry's 'Jerusalem,' brought to them by Keiron Phelan of littlebow and featuring Anna Brønsted of Our Broken Garden).

Great back story and there’s a warmth and engaging character to the music to match that’s very appealing. If you’re a fan of any of those artists listed, you’ll find plenty to love and numerous hints throughout the album of their individual sounds. Maybe it’s just me but I find lots of echoes of Lemon Jelly, in the general open-minded magpie sensibility running through the twelve tracks – at one point a vintage synth kraut jam instrumental sounding a bit like a less frantic Silver Apples ('Spalling farrows') is followed by a beautiful spoken word rumination on life in the metropolis, set to a brooding drum machine and sketched guitar backdrop ('Lopsided').

It’s a real trip this album (through time, space, genre, your head, the lot), get into it.