Death and Vanilla - To where the wild things are (Fire Records) 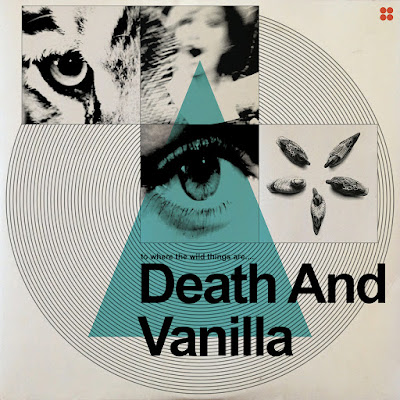 A beautiful album of hushed and sparkling psych pop from Sweden, which manages to sound both precious and thrilling.

Right from the opening song ‘Necessary distortions’ (even that title tells a lot about the band’s aesthetic), the deceptively sweet sounding vocal melodies, the thrumming bassline, the swirling filtered keyboard and the haunted atmospherics are all present.

In fact, ‘The optic nerve’ that follows is like a slowed down sister song, employing similarly mesmerising arpeggios backed up by shimmering reverbed guitar and all manner of electronic squiggles and twirls.

And no great changes for ‘Arcana’, another gorgeous tune with the hushed feathery vocals of Marleen Nilsson, deliriously wobbling guitars and washes of organ on the backdrop.

‘California owls’ comes on like Julee Cruise fronting The Free Design, a kissing cousin of The Velvet Underground's 'Sunday morning', beautiful naive pop that takes on an edgier hue as it grows on you with the spooked atmospheres developing to a symphony of birdsong at the end. That fade out in particular calls to mind the various loopy and genius innovations of the BBC Radiophonic Workshop.

‘Time travel’ has more of a rhythmic undercurrent, a stirring keyboard from which flowers another hummable to-die-for arpeggio.

Over the second half of the album, the band indulges the psych more than the pop although still with a glorious sheen and a low key psychedelic haze brought forth by an array of cinematic sound effects. In fact, ‘The hidden reverse’ sounds like it would be quite at home in a Peter Strickland film (Berberian Sound Studio, The Duke of Burgundy), an instrumental with buckets of intrigue amid theremins, massed banks of backing vocals and vibrato organs. (The band have actually composed a score for the classic silent horror film ‘Vampyr’.)

While ‘Moogsskogen’ has an eerily lilting lullaby quality, which is to say children might find it soothing but adults will almost certainly detect The Twilight Zone between the lines. The album title is quite apt then, a reference to the children's book of the same name written by Maurice Sendak and made into a film for discerning adults by Spike Jonze.

It’s wonderful stuff this, tunes to hum and themes to wonder at, food for the ears and the brain.