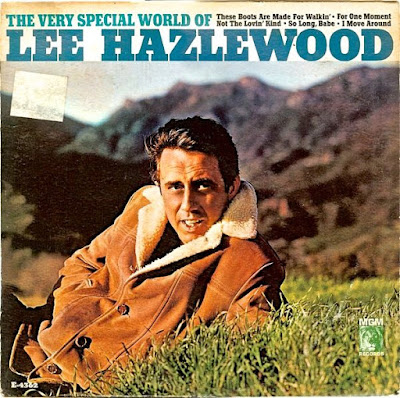 The wonderful Light in the Attic Records has been pursuing a raft of Lee Hazlewood reissues in recent years and what a beautiful thing that is.

This winter saw the reissue of his three MGM records from the mid 1960s. In the wake of ‘These boots are made for walkin’’, the smash hit in early 1966 written by Lee for Nancy Sinatra, LH was given the run of the studio with his pick of the cream of session talent. This was what came to be known as the ‘Wrecking Crew’ and the personnel on these albums includes such greats as Glen Campbell, Chuck Berghofer, Hal Blaine, Carol Kaye, Al Casey and Larry Knechtel.

There’s a whole bunch of treasures on all three albums (Its cause and cure and Something special are the others) but I would have to say that LH hit a particularly rich seam on the first one, The Very Special World of Lee Hazlewood. In fact, the first half of the album alone contains at least four all time classics in the genre LH invented, that strain of world weary, sumptuous balladry, his hangdog croon brilliantly set off by the swirling arrangements of Billy Strange.

‘For one moment’ has the psych folk tinge recognised in LH by later generations (genius quivering strings and massed choir).

‘Not the lovin’ kind’ has an unexpected bossa nova beat with great muted brass parts, flickering gorgeously between major and minor, like a bittersweet low key Bacharach tune.

‘Your sweet love’ is an unashamed gushing orchestra tearjerker (it’s interesting actually how all through his career LH was able to swing between heart on sleeve sentiment and winking irony in his songwriting without missing a step, no mean feat).

And ‘My autumn’s done come’ completes the run, a glorious ambivalent minor key song of acceptance, resignation, some regret, stoic statement of fact and celebration of advancing years, decorated by another memorable string section.

The rest of the album has other moments of enduring interest too – a hilarious retread of ‘Boots’ and two duets with then-girlfriend Suzi Jane Hokom, ‘Sand’ (covered beautifully by OP8 a couple of decades ago) and bonus track ‘Summer wine’, among others.

That Side A run though, it’ll cut you in two.

Another essential chapter in the catalogue of one of pop music’s great pioneers and what a service to humanity by Light in the Attic.