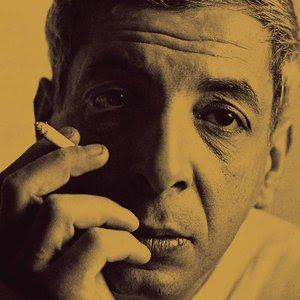 A wonderful discovery courtesy of Stephen Coates of The Real Tuesday Weld and Earth Records.

Mikael Tariverdiev is a household name in Russia, thanks to his prolific output as a classical composer in general, but also for his work in tv and film. However, I’m guessing even the most conscientious cinephile from this part of the world might not have heard of him (and of course that’s what curators and labels are for).

This handsome triple album collection compiles his film work, in particular three main soundtracks from the 1960s – Goodbye Boys, Snow Over Leningrad and I am a tree.

Jazz predominates, a lovely smoky Russian take on the form – a spectrum from slow blues piano to ragtime tunes to furious jams with wailing sax solos. There’s also a hint of the French jazz style, and chanson here and there – that giveaway dampened guitar strumming and brushed snare. The brilliant ‘Waltz from The Last Thief’ uses accordion and marimba, to intoxicating effect. There are shades (a foreshadowing maybe) of Morricone in the wordless female vocal work. And Tariverdiev’s training under Khatchaturian is reflected in some elegaic classical pieces.

Crucially, the arrangements are small scale – no orchestras here, the convention in Soviet cinema at the time, but more intimate ensembles giving a lovely light, airy atmosphere to the music. This lightness counterpoints perfectly the general mood of sentiment and nostalgia.

The piano playing in particular is sublime throughout, full of warmth and feeling and the recordings are superb.

An absolute joy of an album and a fascinating insight into a culture not well understood in the west. Check some pieces below and you'll find more tracks in recent playlists.

*By the way, the background story to the compilation is also fascinating, featuring the very filmic scenario of Stephen Coates transfixed by the music playing in a Moscow café some years ago, and his subsequent search for it - a search that lead him to Vera Tariverdiev, Mikael’s widow and possessor of his vast recording catalogue.