Robert Rotifer – Calais (from the EP If we hadn’t had you, Gare du Nord) 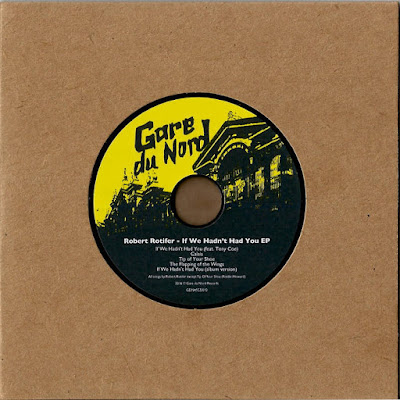 Something rare these days.

That would make you think something worthy and dense and difficult.

Nothing could be further from the truth. Instead what you have is something light and drifting, an impressionistic account of passing through the famous jungle in northern France on the way to Belgium.

Difficult though. No, disconcerting is better. Disorientating. A woozy guitar line seems about to fall down drunk. A background vocal “ooh” takes the part of the steamed pal holding you up staggering down the street.

In the midst of this pleasurable haze, the lyrical content creeps up on you. Around here, an awful realisation hits home – “you see the sea, the sea of tents” – that you’ve been party to a nightmarish scene, although one painted in beautiful pastel colours.

That is an impressive achievement and on several levels we can say this is a brilliant piece of pop art.

*Jazz folk styles are also brought to bear on other political matters – anti-war protests of 2003, the British government decision to participate in the bombing of Syria – on this thoroughly classy EP.