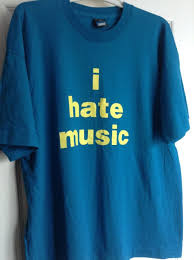 At the end of my twenties I was standing in Waterloo Station in London. I was over for a long weekend with Songs to Learn and Sing. As he queued for food someone tapped me on the shoulder and said, “do you like the Trashcan Sinatras?” I was wearing my I Hate Music t-shirt, bright yellow text on blue, the one I bought at their gig in Nancy Spain’s in Cork a few years earlier, which had a series of anagrams of the band’s name on the back – Anarchist Has Ten and the like. I used to wear this t-shirt around town. It had an uncanny ability to draw comments from people as if it was the controversial opening salvo in an argument, a blatant provocation, a long straight middle finger – “Well I love it”, “You don’t mean that do you?”, and other things. People would approach me distraught, vexed, furious. This particular guy in Waterloo was none of those things. He was politely curious. I told him I did like them and he said, “would you like to meet them?”. Still in the dark, I told him I would yeah and he said, “they’re over there”. He lead me a short way through the crowds to where sat three of the band on the ground surrounded by guitar cases and luggage. I can’t remember if I said anything, I was pretty starstruck. I think one of them admired my t-shirt. They were waiting for a train to Brighton if I remember right. That was it. I waved goodbye and went back to the food queue. “Guess who I just met? The Trashcan Sinatras.” “Fuck off.” And we pondered the cosmic perfection of a world (it could ony be a Trashcan Sinatras world) where wearing a certain band t-shirt could conjure that band in front of your very eyes.

And so, in the middle of my forties, I saw Trashcan Sinatras play live again last weekend in Dublin (after Nancy Spain's there was also Cyprus Avenue in Cork in 2005, where I replaced the by then well fleabitten I Hate Music t-shirt with an updated Weightlifting equivalent). It was a joyous, slightly rowdy, occasion in a stuffed Workman’s Club, adorned by a string of glorious heart melting pop songs. I was again with Songs To Learn and Sing; if anything, we were both below the average age in the room.

The band may be perverse with their t-shirt slogans (I Hate Music was also the name of their own publishing company) but they are straight down the middle when it comes to their songs. I imagine them as a Venn diagram where one circle is The Smiths, one The Go Betweens, and one Camera Obscura. Their songs feature the poignant collision of guitars that jangle and words which are both literate and playful. Somehow there’s also some Burt Bacharach in there and a hint of the classic soul singers of the 60s and 70s. There is also, crucially, an openheartedness, a warmth to their music, despite (or maybe because of) the frequent wordplay. They have distilled the most wondrous chemistry between words and melodies. Furthermore, their new album Wild pendulum is up there with their best ever work and one of the albums of the year for me, so no need to call this a nostalgia trip.

Although I’ve spent a good part of my life swooning to their songs, they are also very much a rock n roll band, as evidenced by the veins soon popping out of singer Frank Reader’s neck once they were into their stride. The lush red curtains at either side of the stage seemed an appropriate frame for their music though, as they rolled out songs with irresistible singalong one liners, one after another – ‘Easy read’, “disco dancing in the morning”, ‘Hayfever’, “why can’t we take a couple of tablets”, ’Obscurity knocks’, “I like your poetry but I hate your poems”. At times the lyrics read a bit like Ivor Cutler trying his hand at haiku (that’s a good thing). The opening line of ‘Hayfever’ for example – Hello, I'm Harry, I've had women I've had germs, They're eerie, wild and wailing and seductive in small doses. What wild, unruly, hilarious genius is that.

Speaking of genius, the highpoint of the show for me was ‘Genius I was’, an undeniable perfectly formed thing only about 3 minutes long from their great A happy pocket album (the one with the kangaroo, as Frank referred to it). The tone self-deprecating, yearning, rushing and a strange giddy euphoria to it as the keychanges twist around your heart. A work of art no doubt and live that wonderful bassline was present in all its driving glory.

They were joined onstage by Carol Keogh (ex Plague Monkeys, Autamata and in her own right) to help out on vocals for a couple of numbers, great to see and hear her too. And for current single ‘All night’ a trumpet player joined the band on stage, Frank (or “Frank the mad bastard” as he was christened by one wag in the audience). After the lovely mariachi turn in that song – a Herb Alpert sample on the album – John Douglas was moved to offer, “ a star is born!”. Always a very funny band. (I mean Satan Catarrh Sins.) Frank stuck around for the sublime version of ‘I’ve seen everything’, the title track of the second album, a cascade of trumpet and backing vocals that could reduce hard men to tears.

And from the new record another string of beauties. ‘Let me inside (Or let me out)’ which is almost a Trashcans template, sweeping, swoonsome, an emotional rush of guitars and strings. ‘Best days on earth’, slower and with a suspended state of grace akin to The Beach Boys. ‘Ain’t that something’, like a slowed down Northern Soul stomper wrapped in a three chord trick with a certain poise and a weary eye.

Frank Reader’s voice has weathered the years very well, still a velvet croon here, a pleading earworm of a burr there. And the interlocking guitars of Douglas and Paul Livingston never sounded better.

Gripes, I had a few. No ‘Bloodrush ‘ or ‘Twisted and bent’ (to be able to play a knock out set without those two masterpieces says a lot about the quality of their back catalogue), plus not much at all from the one with the kangaroo. But it’s hard to bear a grudge against a band this great.