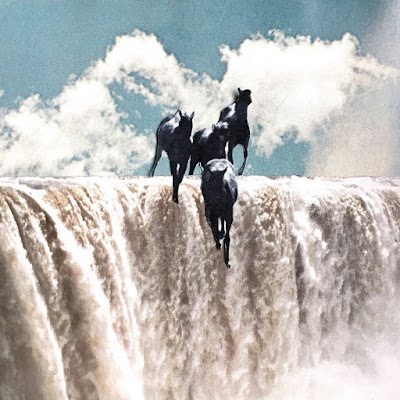 A musical collaboration between a film maker and a former academic.

That’s the kind of set up liable to put some people off.

But this project involving Rick Alverson and Emilie Rex has many great things.

Textures to hang your hat on.

A sense of yearning and adventure. (Are they the same thing?)

A certain kind of classic 60s folk music is clearly an influence although fed through a surrealist filter.

The citing of Alejandro Jodorowsky’s film Holy Mountain in the song of the same name is a clue to where they’re coming from.

In 'Come and see' a finger strummed guitar is the main company for the beautiful double tracks of Rex's vocal. One strained high. One soft close up.

String swells make a compelling chamber atmosphere in 'Watch me'.

In my favourite 'Her body in the sky' Rex's voice sounds like it will break at any second as a clarinet noodles around a to die for organ hook. A kind of kosmische really. In keeping with the song title.

It is a dream of pop music seen through a cloudy prism of wistfulness and hushed regret.

Which is to say a most beautiful thing.

Track 2 in this playlist