As you'll be aware, the Primavera Sound Festival is taking place in Barcelona in a couple of weeks. Unfortunately for me I won't make it this year but I started thinking about previous trips to the East coast of Spain in May. One memorable one was 2009. I had a few interviews lined up in advance, including with Crystal Stilts. This was a band I had first heard of through the Stereogum blog around the end of 2008. Their song Crippled croon got completely under my skin, sounding like a jangly garage rock throwback in thrall to Phil Spector.

I had arranged to meet the tour manager after the band played their (great) set on the Pitchfork stage. So far so spiffing. Things never being that simple, we somehow missed each other. After a bit of hanging around, I repaired to the Food Court with my companions, resigned to missing out on the interview. As we sat with our Yo La Tengo and Michael Nyman sandwiches, who did I spot across a crowded room but the band's keyboard player. Spurred by some urge (probably Dutch courage), I approached the nameless American (Kyle, it turned out), explained my plight and wondered if I could catch up with the band the following day. No problem, he said, in true American can-do fashion, by the way where are you from. When I said Ireland, he mentioned he had Irish blood himself, MacDermotts from Roscommon. At which point I decided he was coming with me to say hello to the gang. Which he did, happily. He was a complete gent, in fact.

We hooked up the next day as planned in the foyer bar of The Princess Hotel, after the band had done an afternoon gig in the park (much too early in the day, according to themsleves). Kyle showed up with Brad, the singer, we drank beer, ate some excellent salty snacks and talked shit about record shops, music scenes, the buzz over The Pains of Being Pure at Heart (friends of theirs), American history, English post-punk, Bo Diddley, SXSW and other stuff. They were excellent company and hanging out with them was a welcome break from the heat and the grind of running from one gig to another (life is tough, eh?). They also recorded some very funny attempts at station idents for me, before finally nailing it. I've kept the outtakes, I might even upload them some day.

Here's the interview, along with my thoughts on their just-released second album, which is a cracker. Enjoy. 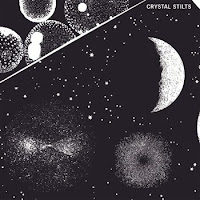 As I've said before, this is a special band. Among the many delights on this record, you will find: the great oscillating bassline of Sycamore tree; the Byrdsian shimmer of Silver sun; the swirling Animals-esque organ of Shake the shackles (which somehow also sounds, thrillingly, like early Go-Betweens); the stomping reverb guitar hook of Precarious stair, eventually submerged under an authentic garage rock beat; the fantastic tambourine and organ rush of Half a moon; the VU-ish John Cale piano+Lou Reed guitar thrash of Prometheus at large; the couldn't-give-a-fuck vocals of Brad Hargett while all around him musical fireworks go off. And finally, the mention of Bo Diddley in an interview from 2009 (below) reminds me that the wonderful Blood barons is a runaway train BD beat. This is a brilliant album.