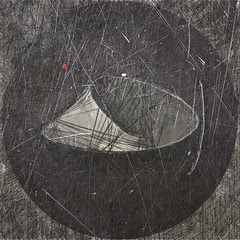 You might remember an artist called Emphemetry, consisting of Richard Birkin from Derby. He was responsible for a beautiful album in 2011 called A lullaby hum for tired streets, a kind of love poem to his home city - it featured in our Best of 2011 round-up. More detail on the album here.

He's announced new music now, one part of which is a soundtrack to a short film called Twinklebox , about the inner life/workings of a music box, made by Aaron Bradbury. There are two tracks involved in the digital release, the title track, a charming music box melody with piano support. The second, Old dreams, foregrounds the piano, with a lovely, close-miked, intimate atmosphere (in a style you might have come to associate with Nils Frahm), which adds an air of mystery to the busy melody. Listen here.

And the film is available here, part one in a series of Music Box Chronicles.

Twinklebox from Aaron Bradbury on Vimeo.

My studio, where my piano is kept, is situated in a very old mill at Darley Abbey in Derby. There are crooked passages between the mill’s buildings, bits of machinery from dead industries, and strange empty structures with walls swelled by years. In the foggy none-days of mid-late winter this place has an uncanny resemblance to how I picture the shadowless walled town in the ‘end of the world’ scenario from Haruki Murakami’s novel Hard-boiled Wonderland & The End Of The World. I started bringing the book with me to recording sessions, and taking it to the ghostly pub around the corner. With every chapter I could point to a place or think of a person in the world around me here that fit the words perfectly.

Birkin plans to make Old dreams the first of a series of piano and string pieces based on the novel, to be released as an EP later this year. Which is fascinating and we await developments with interest.