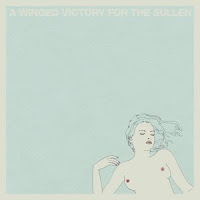 A Winged Victory for the Sullen played in Cork during the week - part of their still-proceeding European tour - a gig I'd been looking forward to with great anticipation for quite a while. If you've never heard the name before, there's some notes on the album on this link.

The gig turned out to be a memorable experience, one that will stay with me for some time, a bright, shining highlight of the last 12 months of music (which have been pretty memorable all round). Here's a review I wrote for Cork-based webzine Noise, which is reprinted in full from this link, with kind permission.

The Half Moon Theatre (the radical wing of Cork Opera House) moonlights as an arthouse cinema these days, so no venue could be more appropriate, I thought, to house the first Irish performance of A Winged Victory for the Sullen. The duo, formed by pianist and composer Dustin O’Halloran and ex-Stars of the Lid founder Adam Wiltzie, released their self-titled debut last year on the Erased Tapes label and the melancholic, cinematic grandeur of its instrumentals swept it into many Best of 2011 lists, including my own.

Sleeping Dog, including Adam Wiltzie on guitar and keys, took the stage first. The rest of the line-up comprised piano/synth/guitar, drums and percussion (including, barefoot, ankle bracelet bells, a first on me). They played plaintiff folk songs with some interesting deep end synths/samples which had promise, but the overall effect was strangely lacklustre, a little too polite, even, something which seemed to be reflected by the muted audience reaction.

After a short intermission, the main event, O’Halloran and Wiltzie joined onstage by cello (the aforementioned ankle bell percussionist back again, still barefoot), violin and viola. Dustin O’Halloran did the introductions with a quick mention of his grandparents’ emigration from Ireland in a previous lifetime. Then the cinema screen behind the band suddenly lit up with a giant close-up of a moon, half in shadow, making its way slowly but irresistibly from wall to wall. The strings swayed into motion and as the notes gradually coalesced against the backdrop of this huge lunar landscape, the most spectacular opening to a gig I have seen in years had been achieved.

Over the next hour or so, the roughly 130 souls in the sold-out venue had the joy of the wonderfully expressive and delicate piano playing of O’Halloran (at times managing to conduct the strings aswell by standing, crouched at the instrument, using his head instead of a baton), contrasted with the great subterranean machine hum from Wiltzie’s bank of effects across the stage. Each ineffably gorgeous melody from their album was aired, each had the same unforced emotional pull of the studio recordings. My own favourite was the superbly titled Steep hills of Vicodin tears, an ambient-classical masterpiece featuring oscillating guitar drones, church organ and a straightforwardly beautiful 2-note string arrangement. The 12-minute A Symphony Pathetique was also glorious, not a second wasted, ending in a kind of gentle cosmic fizz of string saws. As an encore, they even managed to pull an audacious rabbit out of the hat in the shape of Arvo Part’s Fratres for strings – as coups de graces go, a pretty monumental one in my book.

I did have a couple of qualms about the gig. I was occasionally sorry for the applause between pieces (and it was generous and wholehearted), because of its effect of breaking the spell of the music. I wondered if an unbroken flow might have been better, but then again that might have changed the endearingly humble – I’d almost say indie - demeanour of the performance into a more buttoned-up, classical atmosphere. Which is far from where this music is located (did I mention the cellist was barefoot?). I also wondered, if this is cinematic music, what does it soundtrack? Space? The natural world? Consciousness? The backdrop (which moved on from the moon to other, apparently random, images) might have matched the mood of the music better.

However, when I say these were minor misgivings, I mean they were overwhelmingly outweighed by the majesty of the sounds. Lead by the magnetic O’Halloran, with Wiltzie a more reticent, enigmatic, bear-in-the-shadows presence, A Winged Victory for the Sullen lived up to their name and produced a compelling and completely uplifting performance full of emotion, and surely, one of the gigs of the year already.
A Winged Victory for the Sullen Adam Wiltzie Cork Opera House Dustin O'Halloran Erased Tapes Half Moon Theatre Noise