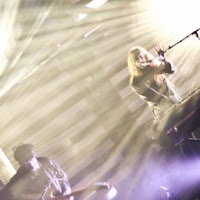 This weekend one of my favourite bands, Beach House, played at the Opera House in Cork, as part of the city's Guinness-sponsored Jazz Festival. The Jazz Festival is something of an institution in the city, taking place over the Irish October bank holiday weekend. Over recent years, the festival has broadened to take in both a wider definition of jazz, and also a greater variety of programme. So for example, the Opera House had Balkan big band Taraf de Haidouks, Beach House and De La Soul, while across town in The Pavilion you could find Hypnotic Brass Ensemble and Toby Kaar, among others.

This review originally appeared on We Are Noise, at this link, where you'll also find more great pics by Bríd O'Donovan - http://wearenoise.com/index.php/2012/10/beach-house-w-holy-other-cork-opera-house-27-10-12/

In passing through Ireland last weekend for three dates (Mandela Hall Belfast, Vicar Street Dublin and Cork Opera House), Beach House joined an elite bunch of crossover indie artists. In the last few years, only The National, and maybe Sufjan Stevens (let’s agree Arcade Fire don’t count), have played this many Irish dates in 1,000-ish capacity venues. In Cork, at least, the crowds came out as if in recognition of this rise in status.

With the seats removed downstairs, Holy Other warmed up the room with his darkly churning atmospherics and precise beats. Although there were a good number of fans offering encouragement, it was music crying out for a small, dark room - there was something ill-fitting about the balcony and soaring ceiling, against his wrung out, stretched, and sometimes beautiful, version of RnB. Still, what a thankless job to open, bang on time, for a buzz band on a bank holiday weekend.

The last time Beach House played Ireland, they had added a bass player to their then 3-piece line-up (to great effect from a sound point of view, by all accounts); however, it’s back to a trio for tonight and the band take the stage to roars of approval.

The opening section featured a classy run from their great 2010 album Teen Dream, laying out ‘Silver soul’, ‘Walk in the park’, and ‘Norway’. Wedged in early on also was the superb ‘Heart of chambers’ from their second album Devotion, a rudimentary drum machine and funereal tempo uplifted by an impossibly soaring melody.

At this stage, I was hopeful for more gems from their early career (‘Gila’ or ‘Turtle Island’, for example). I was to be disappointed in this though, as the new album Bloom dominated the rest of the show, from about the 20 minute mark. It was understandable, of course, although my impression of that album, as a collection of songs not quite as taut and coherent compared to the previous two albums, was confirmed.

As a result, the atmosphere for this mid-section of the gig sagged conspicuously. A couple of my companions even professed themselves bored. While I wouldn’t go that far, the faster tempo of the newer songs did tend to create a certain sameness (safeness?), as opposed to the slower, more challenging/intriguing tempos of the earlier material. There was also, of course, a certain fairweather, festival weekend crowd, which might not have helped the atmosphere either.

‘Lazuli’ and ‘Myth’ were notable exceptions from the Bloom album, drop dead examples of swirling dream pop, both of them. There was also the quite beautiful ‘Other people’, the closest the band have come to sounding like an 80’s Fleetwood Mac - complete with Victoria’s husky Stevie Nicks tones - a direction I’d love to hear more of.

At one stage, I overheard someone comment that the sound was shit – it was far from that, but I did think the guitar was a bit undercooked at times, in favour of the all-enveloping wash of keyboards. The sublime opener from Teen Dream, ‘Zebra’, with Alex’s irresistible, meandering guitar line, although still sounding great, was a prime example of this imbalance. The missing bass might well have helped in this regard.

There is no getting away from the fact that Beach House are an odd band. They are clearly reluctant pop stars (effusive thanks to the venue, the festival, the support act and the audience showed that beyond doubt), a “small” band begun simply as a recording project, but somehow catapulted into the indie stratosphere. Although many of the newer tunes are big, the stage presence is still small, so to speak. There are no grand gestures - the closest we come to that is a savage bout of hair windmill-ing by Victoria during the exultant encore ‘Irene’, as if she couldn’t contain herself behind the keys any longer. The songs are intimate at heart. Personally, I would prefer the arrangements to scale down rather than up to reflect this tone (as well as the stage set-up and lighting, although those were, admittedly, very impressive). But presumably they’ve made a decision to reach out to their new and increased audience by making “bigger” music. In the process, though, it seems to me they may have lost some of what made them special in the first place. Having said that, I must say I still cherish their oddness, and there was enough of that on show to make this a memorable gig, for me and several hundred others at least, if the huge cheers at the end were anything to go by.

They closed the show (before encores), predictably, with ‘10 mile stereo’, known to you all as the shoegazey tune with the galloping rhythm from the Guinness ad. How appropriate, I thought, on this most branded of festival weekends.