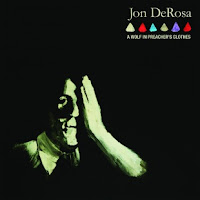 As a companion piece to Little Annie & Baby Dee, try this, another type of New York lounge album, with loss and longing also at its heart. This one, though, draws on rock (post punk, drone - he used to front the drone rock band Aarktica) rather than cabaret for its core sound.

DeRosa has an irresistible croon which, allied with his lyrical observations of New York life (he also works as a bartender in the city), and the beautiful orchestral arrangements, all makes for a very visual effect. There’s also a cover of a Blue Nile song, and Julia Kent on cello is part of the musical cast, if you need any further persuading. Snow coffin is my favourite from the album (you can hear it below) - it's a beguiling mixture of insistent strummed bass and sweeping strings.