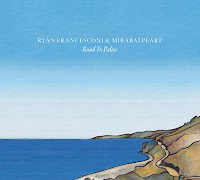 We had a track on the show a few weeks ago from Ryan Francesconi and Mirabai Peart, called Road to Palios. It's the title track of an album to be released on Bella Union on Dec 3rd.

It's a series of tunes, really, spun out over almost 9 minutes - sometimes meditative, sometimes urgent - consisting of guitar and violin instrumentals, and it's absolutely fantastic stuff.

For anyone in Cork, you might remember Ryan & Mirabai played in Triskel Christchurch last year, around the time of the Joanna Newsom show in Marlay Park in Dublin (they both play in her touring band). Here were my thoughts on that gig at the time - it was a stunning performance.

I can't be sure if they played Road to Palios that night, but there were certainly other tunes with similar trajectories, drawn from their travels around Greece and the Balkans.

Here's the blurb from the Bella Union website, with some more info on the background to the album -

Fans of Joanna Newsom should already be familiar with the work of Francesconi. He was a member of her ‘Ys Street Band’, the principal arranger and instrumental foil on her hugely feted triple album Have One On Me, released in 2010, and musical director for that album’s live incarnation, which Peart was also part of. But as well as a master collaborator, Francesconi is a vastly experienced soloist, performing and recording in all manner of guises.

Though Francesconi doesn’t limit himself to one sound – he spans Baroque, Americana and jazz improvisation – he admits his (and Peart’s) main obsession is Balkan folk music, mainly from Greece, Bulgaria and Turkey. “This colour seems to seep into everything I do. It’s not entirely conscious at this point… It’s my hands. It’s not me.”

The inspiration behind Road To Palios was a trip that the couple made in 2010 to the Greek island of Lesvos. The road is a real road, and Palios is a real village – “it might not be there for much longer, but we found it” – and The Road To Palios feelslike a journey, stretching out over time and distance. Some song titles show the way; “Pontic” is from the Greek “Pontus”, meaning, “sea”. “Kalamatianos” is a traditional Greek dance. “Far from Shore” and “Parallel Flights” speak for themselves.

As you would expect, Joanna Newsom is a fan, to put it mildly. Fransesconi, she says, is, “one of the most awe-inspiring musicians I’ve known. It’s nearly impossible to believe he’s picking those strings with one hand.”

Here we have seven questing tracks; sometimes meditative, other times stirring, but always flowing and compelling. Once embarked upon, it’s a unforgettable journey, into Balkan territory and the heart and soul of two extraordinary musicians.

That's one album I can't wait for.