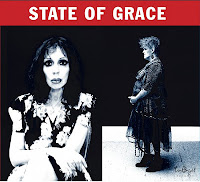 We started the show this week with XTC from an album I only picked up again over the weekend, having "lost" it years ago, the great Apple Venus. River of orchids is such a strange but uplifting piece of music, Andy Partidge's vocal is brilliantly unhinged.

There's a new Hauschka remix album out in the new year, we had Michael Mayer's lovely, slow building house re-do of Radar. He's the head of the Kompakt label, based in Cologne, and with Hauschka/Volker Bertelmann from Dusseldorf, that's an axis of current German electronic music right there.

Jon DeRosa was back again with the gorgeous Snow coffin, the most moving anti-war song in a long time (at least I think I detect a war comment in it). Get Well Soon also in there, with another epic piece of orchestral, sweeping pop music, using Italian 60s/70s film music as his (Konstantin Gropper) drawing board, Rota, Argento, Morricone and the like.

And Little Annie & Baby Dee (pictured above) with a wonderful slice of Weimar cabaret from their superb new album, State of grace - it's all lithe piano, a lived-in voice and a lyric that remembers lost friends. Simply stunning.