May 14, 2013
The Altered Hours are a band based in Cork (although they're not all from Cork, interestingly) and they're creating quite a buzz at the moment. And not just at home either.

May 7 2013 show w/ guests Cathal & Paddy from The Altered Hours, picking tunes + chat re new EP++ by Theundergroundofhappiness on Mixcloud

The Altered Hours launched their EP in Cork last weekend, pretty memorably. Here's a link to a review I wrote of the gig for We Are Noise -

This is an excerpt.

-The band accommodates the obvious psychedelic elements alongside much dreamier ones without any hint of contradiction. In fact, some of the strongest moments of the gig were the quieter ones, a majestic touch of Mazzy Star coming to mind at one point.

-I would dearly love to possess a listening copy of the thrilling ‘Grey on blue’ – its extended rendition here boasted brilliantly flinty guitar jangles around the edges of a horizon drone.

-Title track of the EP ‘Sweet Jelly Roll’ was memorably introduced as a song about “cannabis, loneliness and sex positions” (in case you haven’t heard it, the song poses an answer to the intriguing question, what if ‘Je t’aime’ was reimagined by My Bloody Valentine). It also showcased some beautiful, prismatic 12-string electric guitar, which benefited a lot from the live setting.

-The alternate howling of Cathal and Elaine out front gave a real sense of anguish and conviction and connected the set firmly to garage rock. Elaine’s inspired whooping on the close of ‘Cement’ was another memorable moment. 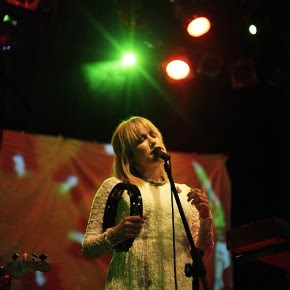 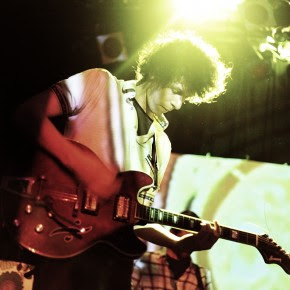 -The final number unleashed an absolute krautrock beast of a groove which may signpost some interesting future directions for the band.

-The lovely nimble basswork and sensitive drumming (she was not averse to using mallets to pounding effect when required) made for a brilliantly muscular and visceral rhythm section. Only with this in place could the sharp guitars and swooning harmonies have their way properly.

-Although it probably doesn’t realise it, this is one refrain that daytime radio needs:
“I’d like to dig an early grave, I’d like to lie down and feel safe”.

-The dynamics of the arrangements were impressive throughout. Where other bands might have pressed overdrive at the first opportunity, The Altered Hours kept their horns in, their powder dry and only detonated their bombs under us when we were sitting comfortably. ‘Smoke your eyes’ was a prime example of this, managing to wield its impact quite deliberately and organically without recourse to 10ft Marshall stacks.

-The rousing ritual of encore ‘Wicked Son’ (apparently unprepared) with massed vocals was a superb touch, creating a wonderfully authentic, communal and primal atmosphere of transgression.

So there you have it. Sex, death and psych rock. Altogether a thrilling combination.

Great as this gig was, the distinct impression remains that this is a band that will only get better as their palpable sense of adventure continues to collide with irresistible pop tunes and outsider instincts.

Apart from coming across as genuine characters completely lacking in cynicism, there's also a freshness about the band that's really, well, refreshing. There are so many hipster-chasing bands around, it's not that hard to spot people intent on their art. That's clearly what this band is.